And all innocence vanished on Aug 6 1945 at Hiroshima when the gun-type "Little Boy" atomic bomb was dropped by the B-29 super-fortress bomber "Enola Gay".

In the explosion all the painstakingly produced fissile material of uranuim 235 was consumed. No test of this a-bomb was possible before the live act. 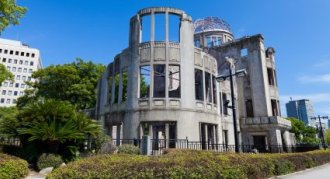 But the "Fat Man" plutonium implosion type a-bomb dropped on Nagasaki was the configuration already demonstrated in New Mexico.

Kilotons equivalent of TNT were demonstrated before a waiting world. 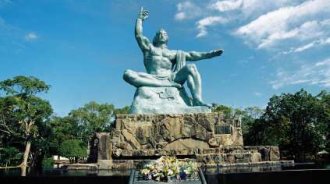 To get to this point the Italian born, Nobel Prize laureate from 1938, Enrico Fermi, had built the world's first nuclear pile slow reactor in Chicago in 1942.

Also working with him and many other scientists, including Oppenheimer at Los Alamos, was Niels Bohr the Danish 1922 Nobel Prize laureate. The Manhattan Project involved many sites, billions of dollars and multitudes of scientists to develop the atomic bomb before Germany had a chance to do so. 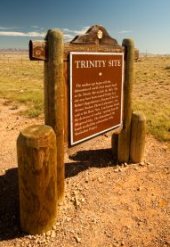 In retrospect it seems almost only the choice of reactor modulator controlled the difference in the final outcome. Germany elected to use heavy water, which was in short supply in the Axis countries. The Allies opted for graphite rods with plentiful substrate available.

World politics and planet policies developed under the shadow of the mushroom cloud. Popular culture, poetry (such as that of Roger McCough and the Merseyside group), songs (Eve of Destruction, Dylan's Hard Rain) and morality were shaped in the shadow of those blinding flashes.

Once the a-bomb arrived, we were never to be the same. Like a two-edged sword that is true for ill and for good - massive destruction and unlimited future power.