Water Energy
Fluid Store of Past, Present and Future

Water energy has been employed in a number of ways for energy generation throughout human history.  Yet water power offers ideas for many future applications.

Being fluid and flexible and composed of useful basic elements it lends itself to many means of producing energy. As such it is a great illustration in the possibilities the universe about us offers for current and future alternative energy water power.

Standing at the bottom of any significant waterfall the power stored in water can readily be felt. Especially if you stand directly under the stream.

The direct application of water falling yields some of the simplest methods for harnessing water power.

Being fluid and flowing with gravity's action from a higher to a lower point gave rise to its earliest uses. 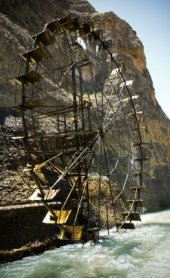 And it lends itself to one of the most common applications in power supply now - with hydroelectric power generation.

Water's unique properties offer a huge and powerful array of energy options. Being incompressible and denser than air it will generate much greater power than equivalent wind applications.

With its high coefficient of heating it holds a huge amount of energy as its temperature rises.

Changing from one form to another also requires and stores huge amounts of power.

All these properties make it useful as a direct source of energy as well as lending itself to store and create power from other sources.

Using Its Properties In Water Energy

Well illustrated in many places, heat from the earth's core results in geothermal attractions. A great illustration of ways it is possible to employ power generation from it.

To keep up with the latest news in geothermal energy generation check out the relevant news page.

The combination of gravity effects from the sun and moon on the water reservoirs of the earth's oceans have produced further ideas of power generation.  Whether from the regular tides and from the associated waves, which are also exacerbated by another power, that of the wind.

Wind on the ocean surface, along with surface heating, gives rise to other marine energy sources that can be tapped.

Water is giving many current options for power generation. And more will be derived from it in the future.

Water energy is already associated much useful power generation.  We've only just begun to tap a fraction of the possibilities.