Wind energy production appeals as a renewable energy source. It is so freely available at all places on the earth's surface - on the sea, at coastal areas, or deep inland.

From earliest times man has used the energy of the wind - in yachts and sailing ships of various kinds. Wind has supplied a motive force for travelling.

Wherever new settlements occurred they required their own power supply - just the beginning of the continuing search for ways to supply our needs to grow, move and expand.

But we also employed the wind's effect in windmills of various designs. This has generated direct power for turning millstones etc and in pumping for irrigation. 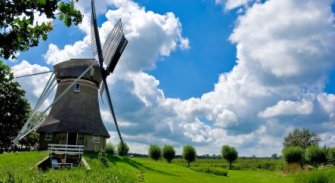 Changes in temperature on the earth's surface from the effect and absence of the sun's warming rays create differing densities of the air above the surface - warm air rising, pulling cooler air in. It gives us a renewable energy world.

Different world areas have greater or lesser amounts of wind generally. At the earth's surface wind is variable in strength and timing.

The most powerful and continuous sources of wind power would be at the elevated jet-stream levels. Technically this level is yet to be explored - apart from some uses in regular airline flights.

In more recent times we have turned to wind power again for alternative energy power generation.

Whether this is in simple designs for individual homes or whole land areas devoted to generating energy from wind. In other words ways to farm wind as a primary resource.

The temperature changes mentioned above create winds about regions of varying air pressure. But there are also effects of air movements from temperature variations such as occur in coastal areas at different times of the day.

More important, though, than this is the effectiveness of wind power off the coast of many countries compared to land areas used for this.

Recently there have been some questions raised about how healthy it is for turbines to be situated near inhabited areas. And people have even coined a health syndrome related to these structures

With the calls for renewable resources for energy, the demand for lowering carbon impacts of countries and companies, wind energy seems to be almost always in the news these days.

Wind power offers many different ways of harnessing a readily available world-wide resource. In many ways it is "flavour of the month" with energy companies.

Got A Personal Story On Wind Energy?

Do you have a great story about wind energy that would you would love others to know? Let's get the word out there! Share it!