Through Bill Mollison permaculture came into my consciousness.  He continues to challenge me in my understanding of how we can best interact with the world for the good of all.  Including designing alternative energy systems. 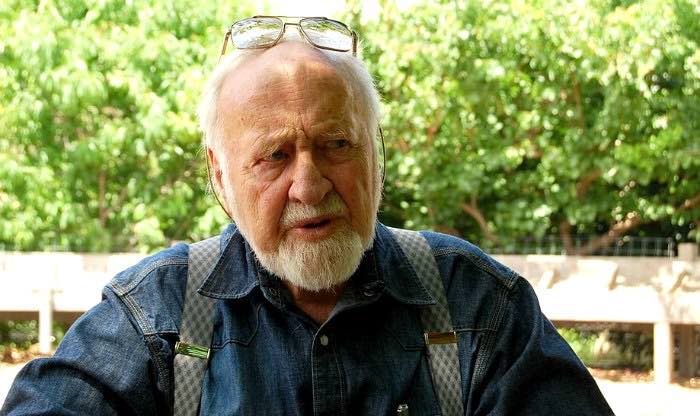 Bill Mollison at the time of his 2008 Melbourne University course

Around the time we moved onto a lifestyle lot of five acres, I had serendipitously come across him.

We had wanted a bit more land to raise more fruit trees and grow a better garden.  Aiming for around two acres, we found an ideal piece at five.

Having talked with and watched many people over the years I had some cautions.  So many idealistically moved to a lifestyle property to create their ideal haven.

Usually within a few years they had decided to move on.

In all cases it seemed to be time commitment in managing the extra land.  They would be busy at work during the week days.  In the weekends they would be managing their acreage.

They ended up with no effective free time to enjoy the rest of their life.  Yes they enjoyed it.  But it was just too much.

Running animals seemed to create extra commitments.  With daily management and the extra challenges they created with illnesses, fly strike, ground damage and so on.

Those who seemed to live on such places longer than average had extra help.  Usually paid.  Therefore involving extra expenses.

Beginnings Of The Idea

Knowing we had bought more land than we initially intended meant we would be more intensively involved, time-wise, than what we were initially aiming for.

Being creative around this, I realised there could be benefits from extra acreage.  It should be possible to generate extra income, beyond just benefitting from extra fruit and vegetables ourselves.

But how to do so without saddling ourselves with extra time and energy commitments?

That’s when Bill Mollison permaculture came into my life.

With so much information on the internet nowadays and innate curiosity it’s hard not to come across some useful information. 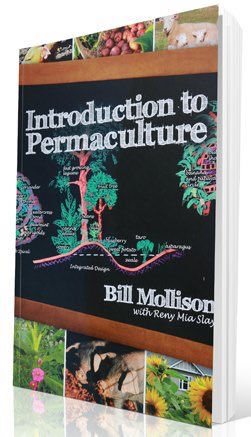 The more I investigated, the better his approach seemed to be to suit us.

I invested in one of his introductory books - “Introduction To Permaculture”.

At the same time as we moved we were able to hear a local permaculture designer speaking at a home show.

We latched on to all we could, not yet having a full understanding of all the terms and ideas.  We even invited the speaker to come and have a look at our place for us, to give us some ideas.

We visited his place further north from us, seeing how he had developed his land.  Sited as it was in a community of similar-minded people sharing some common grazing areas as well as their own individual plots.

Having just begun to grasp Bill Mollison permaculture almost immediately we began creating our vegetable garden.  Located right outside the door of where were living and immediately adjacent to our future building site.

Latching on to keyhole garden design from “Introduction to Permaculture” I sweated through the summer heat to emulate the concept.

Just a few errors about how to start the plantings.  We were using an area that had been metalled for truck access and loading for the prior egg farm.

Once we adjusted a few elements our garden began to flourish.

Having seen a banana circle at the home of our local permaculture designer I arranged one to be dug when we had earth moving machinery on site for our waste disposal system.

In both the kitchen garden and the banana circle, I had understood the design element.   But not the overall deeper design that really would make these interactively effective. 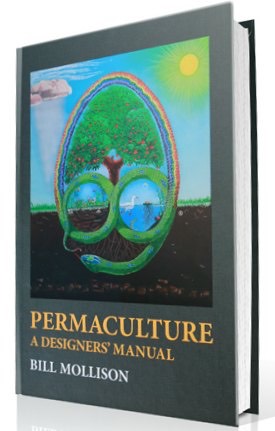 To understand the concept better I upgraded to Bill Mollison’s “Permaculture - A Designers’ Manual”.  I dug in for enlightenment.

You can check out these couple of books along with others of his at the Permaculture News website.

Soon after this I received an email from Bill Mollison himself letting me know of an on-line permaculture design certificate course that was about to start.  One of his early students and later co-worker with him, Geoff Lawton, was running it.

The introductory videos were eye-opening.  I jumped in to learn as much as I could.

Confirming my experience Geoff shared that the Bill Mollison “Permaculture - A Designers’ Manual” was not created for simple reading through.  It was a reference guide to be constantly referred to.

But it contained the distilled the wisdom Bill had accumulated over the years from his original glimpses of the process by observing wallabies in a high altitude Tasmanian wild valley to its full blown development and proposal.

At its creation stage he held a University of Tasmania post conducting his popular course where, with one of his students, David Holmgren, he launched the first official book on the concept. “Permaculture One” outlined the trailblazing ideas.

With Geoff Lawton’s course and using the Bill Mollison permaculture manual as a guide, I came to a deeper understanding of the concept.  I created my own design for our property.

What Is Permaculture - It's Fluidity

Not that permaculture is an easy concept to contain.  As Bill Mollison himself would say, there are no dogmas.  It is not limited.

Essentially it is a system of design.  Built on observations.  In all cases each situation will create its own design outcome.

Also it does not just incorporate agricultural systems.

It will form a paradigm for designing and creating food and growth in a multi-storey tenement deep in a major city, to balconies, to community plots, small holdings to large farms and whole country or continent-wide planning systems, if allowed for.

But it’s not just a land or garden design system.  It includes community creation, trusts, governance, money management and creation and much more.

Although a crusty, iconoclastic, dry-humoured bugger, Bill Mollison was openly received by many indigenous peoples.  He observed and learned so much of their generationally conceived wisdom and understanding.

He could conceive how their concepts helped them manage land in the past and could benefit our modern societies.

As far as energy use and creation was concerned one aspect of Bill Mollison permaculture concerned house and group housing to community designs.

Considering the varied climates of the world he had developed ideas for ideal house design elements for each area.  I will cover these in their own page, to make this more digestible.

At the same time he alluded to alternative energy systems that had all but disappeared.

Solar ponds were still used in some parts of the world.  At a time when so many energy generation experts say that storage of renewable energy from solar generation is its Achilles' heel, he could demonstrate long term energy storage with these very simple designs.

An example of a long-established solar pond situated in India.

Again I will go into this concept in more detail in a dedicated page.

In the Bill Mollison permaculture course that he ran with Geoff Lawton on Melbourne University in 2008, he explained the trompe design.

But it could also be used for cooling and refrigeration.

It even powered cars with very small tanks producing no prollution except cool air.  Even this could be directed to keep drinks cool on an outing.

Big oil bought out and removed as much evidence as possible on this dramatic alternative energy system that powered much of Paris and Chicago many years ago.

Do we ever learn?

There will be more detail on trompe design alternative energy creation in its own page.

Throughout his life Bill remained ever optimistic while exercising a healthy disregard for established systems and administrations.

Initially wanting to protest and break these down, he decided the only viable way that would create long term change was to focus on what could be done.

Over time he knew if he shared his wisdom with as many willing ears as were available Bill Mollison permaculture would transform the world.  Inevitably.

As its very niche but growing community can attest, he will not be disappointed.

Bill Mollison permaculture has had a major influence on me and the way I now think, evaluate and plan for long term alternative energy initiatives.