The large hadron collider straddling the border between France and Switzerland was explosively introduced to the world at large by the fictional action movie Angels and Demons. From the film it appeared the project was aimed to produce anti-matter.

In the final scene as the villain attempts to escape his helicopter blows up and a major shock-wave hits people on the ground. Anti-matter taken from the experimental site reacts with matter creating the huge explosion.

The understanding is that the cern collider is aimed to produce anti-matter. That it will give us either the chance at some other form of alternative energy or further weapons possibilities.

All Photos Courtesy of CERN 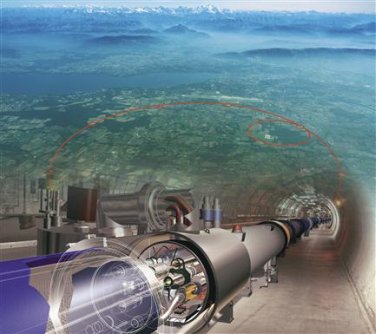 But even with the energy levels it could create the expected cost of creating anti-matter on earth would be far too great to make it a cost-effective energy generation source. In space travel, where it could be acccessed in flights, it should be very useful.

Then there were the stories about how the operation of the collider would create black holes that would suck the earth into it. That starting it up would spell the end of the world.

When a bird short-circuited one of the initial power-ups some scientists even postulated it had time travelled - sent from the future, Terminator-like, to stop the collider causing horrendous consequences.

History Of The Hadron Collider

So what was it designed for? How far has it got to this point?

Created by CERN - the European Organisation for European Research, founded in 1954 - and running a huge circuit about the French-Swiss border near Geneva, it is the latest in a series of particle accelerators and detectors to further our understanding of fundamental particle physics.

It was also at CERN that the World Wide Web was born in 1989, a creation of Tim Berners-Lee, a scientist there, to allow scientists from different centres to share information. For the huge projects that had been established in the past and especially with the hadron collider collective computer power was necessary to handle and crunch the data.

Previous particle accelerators at CERN and elsewhere had been useful in delivering nuclear particle information. Some aspects still proved elusive. 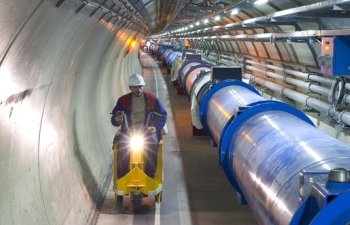 Protons and neutrons are not the smallest building block of our universe being composed of smaller essential particles of quarks, held together withgluons. Even these parts account for very little of the total mass of the nucleus. Huge forces are required to overcome the attachment of the gluons and allow for the more elemental particles to be studied. Of interest, and yet to be experimentally found in other experimental approaches, is the Higgs boson proposed as the particle that gives everything its mass.

By creating two streams of fast-moving protons (or hadrons) each approaching the speed of light and moving in opposite directions within the large hadron collider's well-configured long tunnel and then colliding them together at chosen times and places it was hoped that energetic conditions approaching the Big Bang at the beginning of the universe could be created - if only for the briefest part of a second.

Finally this elusive particle was demonstrated in the early part of 2014.  Results have been produced from this huge machine!

Along the nearly 27 kilometre long circular tunnel there are a number of monitoring posts each designed to reveal specific answers. 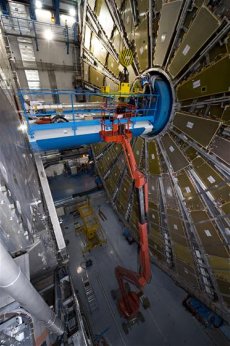 Each of these is located in either France or Switzerland with a varying number of scientists from 20 or so to nearly three thousand associated with each one. Representing many countries, they aim to unlock some fundamental answers about our universe.

Within the particle physics universe two main streams influence thought - those of purely theoretical research and others producing experimental results. The theorists postulate ideas such as string theory to explain the structure of the universe. Within this arm there is a feeling that there are a number of other dimensions (beyond the four people commonly recognise) and that some of the unexplained phenomena that have been observed in space could be contained within such a structure.

With only 4% of the observable universe being made of matter as we understand it, there are other components out there. Dark matter (at 26%) and dark energy (70%) also exist, exerting gravitational effects on the universe we can see.

The experimental physicists would love to demonstrate some of these other aspects and how matter obtained its mass.

Some of the monitoring posts aim to demonstrate the Higgs boson for the first time. At the same time they hope to demonstrate other dimensions and evidence of dark matter. Others are looking for quarks postulated present in anti-matter, cosmic ray effects, checking proton size and one to create the early post big bang postulated quark-gluon plasma, from which by primordial nuclear fusion the universe formed, with the chance to clearly demonstrate these component basic particles.

The power of the large hadron collider CERN is seven times greater than any previous similar apparatus.

To extend our understanding it had been assigned a budget of 7.5 billion Euros!

In spite of early delays, the hadron collider has been running and the world has continued to exist.