The passive-house concept intrigues with its massively low energy requirements pre-figuring standards and levels that are likely to be mandatory by 2050.

Adhering to a few design principles it is possible to produce very comfortable houses requiring little to no added heating even in locations at extremes of latitude.

With rising electricity costs and concerns for the environment who would not want to at least consider these ideas?

My take on green architecture and saving the environment in our buildings was of a dour, spartan existence with low pressure showers, poor quality fluorescent lights and minimal creature comforts.

Not exciting in the least. More something to be avoided, leaving the zealots to their desires.

However, the more I have looked at the ideas of what is essentially a passive solar green house, the more I have become excited and keen on its approach. There might be extensions to the concept that could be even more exciting. But more on that later....

Essentially the underlying idea is to maximally benefit from the natural sun exposure of a home, house or other building. Allowing the sun to internally heat the house and then maximising the retention of the heat through effective construction methods.

These practices have become embedded in the passivhaus standard principles.

They include highly effective insulation, exquisite air tightness, maximally benefitting from solar gain, avoiding thermal bridges which allow heat losses to the ground, through walls and roof, and efficient heat exchange. In house temperatures are maintained in a narrow comfortable range by day and night and throughout the year.

In the 1970s a number of countries, including the USA, worked hard to create effective home insulation. No doubt some of this was spurred by the oil shock of that time. A major problem occcurred. Maintaining even, warm temperatures encouraged the growth of molds.

In the 1980s more stringent building codes were introduced in Sweden and Denmark. These acted as a stimulus to develop even better building standards.

Professor Bo Adamson, then based at Lund University in Sweden, collaborated with Professor Wolfgang Feist in Germany to produce the building code that became the passivhaus standard in the late 1980s. 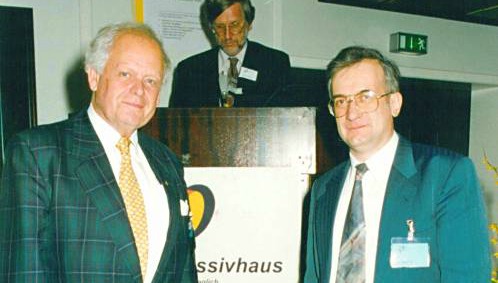 Wolfgang Feist, being a physicist, developed his approach to housing from basic thermodynamic physics principles. Expecting there to be some departure from classical calculations, he was surprised to find close adherence to basic formulae.

Construction of the first block of passive-house units, or terraced houses, began in Darmstadt, Germany in 1991.

At that time most of the items needed to be designed from first principles. Nowadays most items are available as standard construction pieces, greatly reducing building costs.

The basic principles of the passive-house design have not changed since.

Essentially the ideas behind the concept are what are aimed for. The methods to attain these are flexible.

This degree of freedom has led to some more recent conflicts for US-based practitioners of the passivhaus concept. 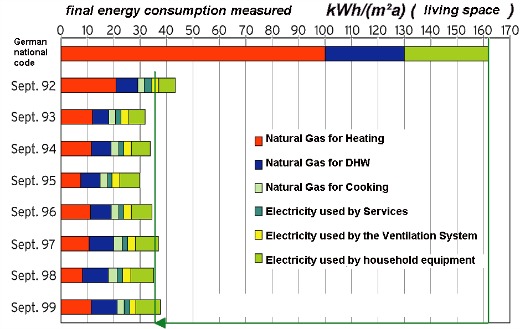 All forms of energy consumption in the units were significantly less than the German national average house.

In particular space heating for the homes was around 90% less than the national average. One house used no additional heating between 1994 to 1996.

Heating is achieved through passive solar energy streaming through the large south-facing windows (for the northern hemisphere).

Cooling in summer can be achieved by appropriate-sized eaves or other shading to shield these south-facing windows from the peak summer sun. Also windows can be opened to allow cross-ventillation.

When you consider that home usage of power accounts for 40% of national electricity consumption, a large overall reduction in house consumption will be hugely beneficial to countries in the future.

Heating can be supplemented in any way best suited to the owners and the house.

Solid fuel burners, heat exchangers utilizing either outside air or ground-source heat, or other forms have been used. Extra heating requirements are minimal.

Usual human activities such as cooking, heat given off by appliances, as well as human body heat, all serve to add to passive-house heating.

To maximize the benefit of these heating sources a highly efficient heat recovery ventillation pumping system is an essential part of the design.

Air recirculation and freshening is controlled to maintain a fresh, even-temperature environment.

Moist air is extracted and treated from kitchens and bathrooms.

People living and working in these homes find them extremely comfortable.

To further maintain this even temperature huge increases in the insulation standards for conventional buildings are applied. This is usually achieved by very thick layers of insulation.

There is an outer insulation layer, one in the building cavity, and another inside this again where services can be fed through.

Insulation can be from a variety of sources appropriate for each layer.

Aerogels should see effective incorporation in this area - greatly reducing the thickness of the layer required.

The aim is to achieve a high, well-defined and measured, level of insulation, rather than a particular depth.

All possible thermal bridges are eliminated. Communications through links between layers must ensure no extra heat is lost or cold admitted through thermally conductive connections.

To further enhance this, absolute sealing of the house must be achieved by membranes and tapes to seal connections.

A certified passivhaus must show minimal air leakage, many times better than that specified for standard house construction.

This must be confirmed by a blower compression test at the house door.

The home country of the passive-house has the highest number of such constructions. Quite a number have been built thoughout Europe, Scandinavia and the UK.

There are even flatpack homes built to the standard for supply throughout Europe coming from the German Hanse Haus company.

Only a few tens have been built in the USA.

The video above illustrates the erection of a Hanse-Haus flatpack home - all walls and roof - in just eight hours - possible with the system.

Only a few tens of actual passive houses have been built in the USA.

The main representative of the concept in the USA - PHIUS, or Passive House Institute USA - has recently been cast adrift from the parent PHI - PassiveHaus Institute in Germany.

Part of this stemmed from poor performances of students from the US in 2011 newer examinations in the technology.

A Canadian house that did not fit the strict parameters of the concept also contributed. It had passed a blower test for air-tightness, but failed on other criteria.

Architect Katrin Klingenberg, a former student of Fiest's, and co-founder of the US branch felt somewhat aggrieved. But she now feels it may prove useful in promoting the uptake in the USA were only a score of passive-houses have been built over a decade or so.

Due the open nature of contruction materials allowed under the code, the houses did not allow the builders to claim some US subsidies available for "green buildings". Being able to develop a joint approach with other green builders should remedy this.

It may also lead to a much greater uptake of the design style within the USA.

Meanwhile the representative for the passivhaus concept in Ireland, genial gentleman Tomás O'Leary, from Energy Quarter is beginning instruction and examination courses in New York and San Francisco.

He plans to expand to other US cities in time and sees plenty of scope for other companies to follow his lead.

His videos of the process have been extensively utilized in the construction of this information.

One of the beauties of the passive-house concept is the idea of being able to achieve these sorts of standards in retro-fitted houses.

You do not require a new build to participate in the benefits.

For new builds, though, the main construction can be in wood, brick, masonry or other materials.

As long as the basic parameters for air-tightness, insulation and passive solar gain are achieved, materials are irrelevant.

Living in a house that has very stable warm year-round and day and night temperatures of 20-21 degrees Centigrade (68-70 degrees Fahrenheit), fresh, recirculated air and masses of natural daylight sounds infinitely appealing. Why wouldn't anyone want to build and live in a passive-house?