Solar panels would be the most well-recognised alternative energy generators in the world. From uses in calculators to satellites, houses and in regular power station facilities, they have been applied in many situations. 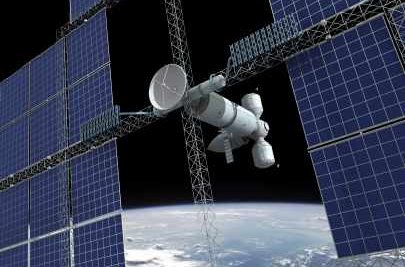 They allow the use of one of our most potent renewable energy sources.

As mentioned before the amount of sunlight the earth receives over about an hour would supply all the earth's needs, even with the relative inefficiency of a typical solar cell which, at its best, is less than twenty percent.

To produce power from the sun requires a material that can respond to light. Many know the photoelectric effect where light hitting a material will cause it to emit electrons.

In a solar panel the related photovoltaic effect is employed. Incident light causes an electron to change position across a usually diode material to create a voltage difference in the photovoltaic cell. 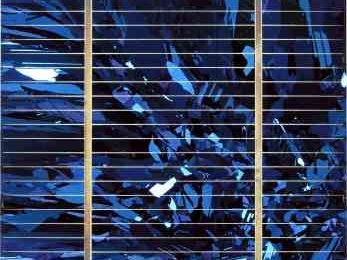 A solid state diode is a semiconductor, like silicon, that by doping with various impurities has a positive and a negative side, each connected to a wire.

Changes, such as with light incidence, will create changes at the junction between the two sides which produces the effect of current generation.

A series of photovoltaic cells is connected to form a panel which will create enough total voltage differential for effective power and to create the necessary current. 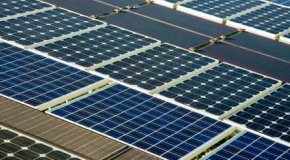 A single panel can power something like an emergency telephone.

For anything bigger, and certainly for homes and power-station applications a full array of panels is required. 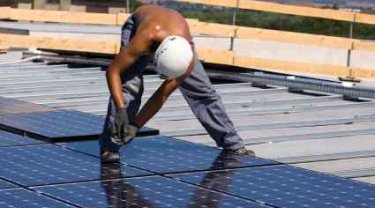 The cells themselves are sensitive to many environmental impacts, including temperature variations, water as both rain and snow. To protect them they need to have some protective cover like glass.

To help maintain an even temperature most panels allow for a good ventillation area beneath them.

Also to get the best angle of incidence, as this changes with distance from the equatorial central area of the earth, panels are angled - obviously as the sun moves through the sky over the day, there will be changes in angle of incidence. 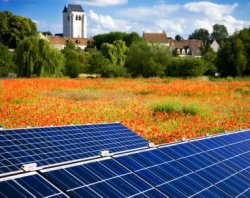 The greatest photovoltaic effect occurs at wavelengths specific to the diode or other material used. Light outside the critical colour has little effect.

Loss of the direct sunlight irradiation also affects performance and some solar cells require an arrangement to prevent the current reversing, drawing off power, from say a battery, and creating local heating of the cells.

Some people propose using the infra-red part of the spectrum as this will still allow power generation when the cell is not directly in full light.

Another way to make them more efficient is by focusing the light through a lens or making parabolic focusing panels such as those used in solar thermal ideas. 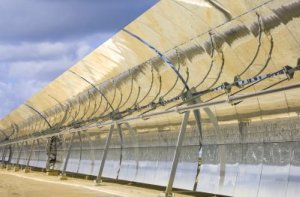 Newer developments in technology have changed some parameters.  The more organic and dye-based systems allow for better uptake in low light situations, creating more continuous power generation and the ability to make the panels part of the actual building materials.

The cost of the panels is not insignificant although, as with computers and other similar technology, this has fallen regularly over years of production.  The entry of manufacturing in China with its cheaper cost structures has delivered even cheaper world-wide prices.

Countries with the greatest uptake have achieved this with subsidies to make the panels more cost-effective.

Solar panels have a great simple appeal. There is more than enough energy reaching the earth to employ them. And the source is totally renewable as long as the sun continues to shine.