Wind mills do not have quite the same length of history as their water-based cousins, but they have been around for centuries. And many are actively employed today. 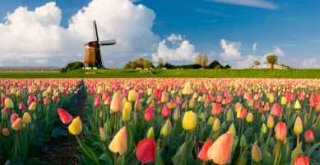 The first was built in 1185 in Yorkshire, England!  Yet the commonest ones most of us are aware of are the Dutch windmills, those from Santorini and Mykonos, and for those of us around rural areas those smaller units still seen on many farms.

Until a few decades ago when people first began using wind to produce electric power, these devices were used for their mechanical abilities. In fact a windmill could produce from 30 horsepower upwards, much more than water mills.  They could be erected wherever wind was available, not relying on streams and rivers for water-based mills.

This allowed further for a transition from farm-based feudal subsistence economies to town and city-based populations and a market economy.  All made possible with these new alternative energy sources.

Grinding grain was an early application, relieving animals and humans of work in turning the heavy millstones. 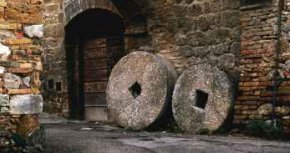 Over time different ways were developed to regulate the turning speed with varying wind velocities. Like in a sailing ship, varying the amount of sail controlled pace. 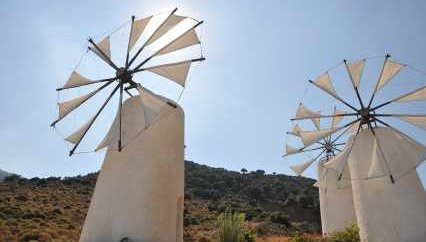 The cog connection converting the sail-connected shaft to the active driving shaft could be changed manually to vary speeds.

The Greek Island windmills were fixed in orientation due to more stable prevailing wind directions. 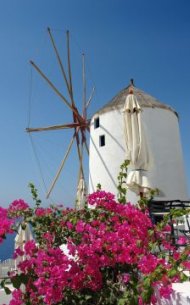 Those in northern Europe developed ways of turning to face the wind, changing from initially having the whole structure turning to just having the top part doing so.

A perpendicularly-oriented small sail was developed to maintain head-on orientation to the wind of the main driving sails. 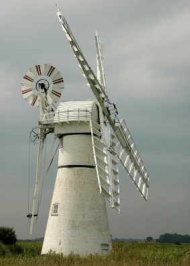 Grain-grinding mills were developed with governors to maintain a constant gap between the two stones for even grinding independent of speed.

Other tasks could be added too such as shredding and husking.

A common application has been in pumping water, whether to pump water up from wells, to pump water from reclaimed land (as in the Netherlands), or to irrigate fields.

Sawmills could operate their machinery with the power from the wind.

And various applications from crushing to shredding rocks, paper, agricultural materials and in waste management have utilised these wind-based mills.

With the development of steam and later oil-fueled engines, many mechanical applications were no longer operated this way. 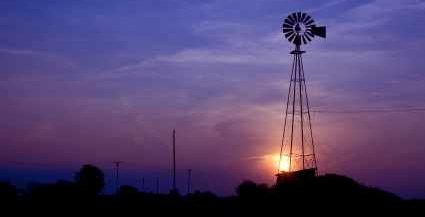 In areas where electricity reticulation is difficult or absent windmills still have a place in providing mechanised power. Especially in supplying water, irrigation and drainage.

The biggest application these days though is in turning turbines to supply power. Around the world. And increasing.

However wind mills, wherever they are and whatever their applications, are still limited by the vagaries of the breezes.