Alternative energy for homes that can facilitate energy independence with continuous generation and a very low carbon impact sounds something yet to be developed.

But a new application of a nearly two century old design is making this a reality in Europe. 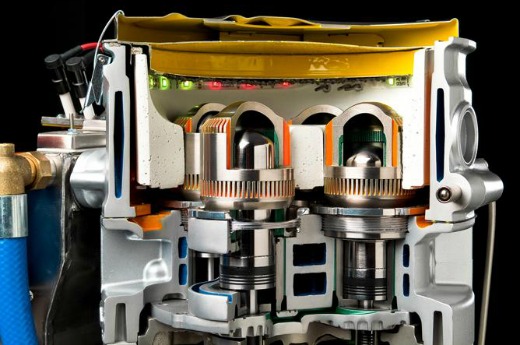 What if you could generate all the power your home could need?  What if that could be delivered 24/7?

What if this removed the need for electricity transmission lines?  What would our homes and communities look like?  What if there was a more efficient way to deliver heat to our homes?

Reticulation and remote power generation results in significant losses along the way.  Around 45% of the generating energy is finally delivered to the end user.  Some of this is down to the inefficiency of the turbine generating system.  Some is due to power losses from transmission.

Then there is always the need to link generation to demand which fluctuates so much during the day.

All of us are familiar with the rising cost of our electricity supply.  Much of this relates to establishing the generating station and to the erection and maintenance of supply lines including substations and regulating equipment in the system.

If we begin to generate our own power and use less from the supplier, we find we get hit with increasing unit costs for our electricity because there is always a base charge included that relates to the maintenance and continuing building and upgrading of the supply source and transmission system.

What if we could separate ourselves from this to the point where all the reticulation that was required was in our own homes?  Or possibly within a local community?

At this stage this alternative energy for homes design is based on using natural gas, or more recently propane, to drive it.

But already we know that concentrated solar thermal power could power the same process.

Yes it would not deliver the heat 24 hours a day. But what if the generated power and heat could be efficiently stored?

Interestingly the development of this useful alternative energy for homes option began in New Zealand.  In fact in Canterbury University in Christchurch so recently shaken by its serious earthquake.

The basis of the design was developed in 1816 by the inventor Robert Stirling, a Scottish Presbyterian minister.

It was his alternative to the by then well-established steam engine.  Offering a safer engine than that of steam it did not manage to replace it.  But it was utilized in a number of industrial and domestic applications.

It requires some initial heating to build up the driving energy.  Hence it cannot compete directly with internal combustion with its almost immediate response.

But the closed unit results in much reduced wear and much more efficient energy production.

In the late 1980s Don Clucas from Ashburton, South Canterbury, chose to work on the Stirling engine for his PhD in mechanical engineering at Canterbury University.  It had fascinated him from his young teenage years.

Together with professor John Raine (now head of engineering at Auckland's AUT) they developed a version that could be used for energy micro-cogeneration.

Initially aimed at the shipping market, over time a domestic energy generating version was developed.  This was tested in the UK. Europe, with its relatively cheaper natural gas to electricity supply costs, became a natural focus for distribution.

In 2004 the first domestic unit was sold.

In June 2012 Meridian Energy sold its stake in WhisperTech to the joint venture partner and manufacturer, Mondragon. 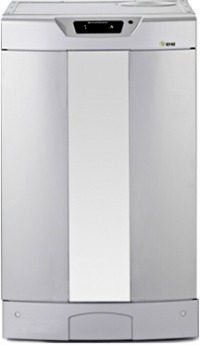 The WhisperGen units, around the size of an automatic washing machine, can produce up to 14.5W of heating (for hot water and space heating) and 1kW of electric power.  This at 96% efficiency!

To be self-sufficient in power a greater electric output than 1kW would be necessary.  Already 3 kW electrical power output version is proposed.

The recent addition of the ability to use stored propane gas makes the units more versatile.

A good desk-top demonstration of working Stirling engines that can be used to power other items, illustrating the way electric power could be generated, is available through the high quality models of the German company Bohm Stirling-Technik.

The economic downturn in recent years and increasing electricity costs have led to a rapid increase in the adoption of micro-cogeneration, in value estimated at a billion Euro in 2102.  Much of this comes from activity in Japan and Germany.

These untimely economic changes heavily impacted further production of WhisperGen units.  As of now Mondragon has closed its production company for these innovative machines.  An opening for other manufacturers exists.....

As a possibility for future development in alternative energy for homes using heat from a parabolic solar mirror would achieve an even lower, effectively nil, carbon footprint than the current gas-powered model.

To be effective for regular home power, though, this would need to have an efficient, well-managed, battery storage system.

It would be possible to develop a hybrid version with natural gas or propane as back-up power.