Do electric power transmission lines have to be an inevitable part of supplying our communities with electricity?

What about their costs in dollars, health and aesthetics? What alternatives do we have? 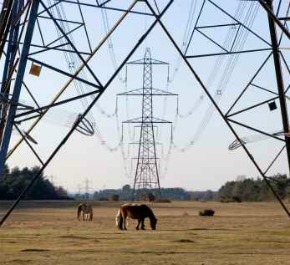 Growing up with power supply lines to houses that endangered any kite flying activities, getting underground cabling seemed such an advance.

It was a little more costly. Some people did not want to foot the bill of supply to their house, leaving some lines still visible.

At least in new subdivisions underground wiring was already done.

Aesthetically underground wiring is more appealing. Maintenance on the lines becomes more complicated and roads seem to get dug up repeatedly.

On the plus side downed live overhead lines are not a factor in car versus pole accidents.

Only one 22,000 volt cable remained, leaving twenty city blocks without power for five weeks as the supply company established emergency overhead lines along the main railway line to the city.

Businesses and apartment dwellers were forced to relocate in the interim. These were just cables from a step-down station in the south of the city. Not the main power transmission lines from the grid.

People throughout Canada and the United States have experienced large area blackouts a number of times in the last few decades often triggered by a seemingly small event.

The power grid does seem to have limitations and weak areas. Partly this has to do with variations in demand.

Most of the power we consume is generated as we use it - in real time. Complex switching and monitoring arrays are required to control these.

The upside of a networked grid of electric power transmission lines is the ability to shunt generated power around areas as it is needed.

Suburban areas will be consuming more power in the mornings and the evenings, while businesses consume most in the day.

In winter more power is consumed with heating at the beginning and end of the day, while in summer peak heat times cause loads from air-conditioning.

Most of Europe, including many of the former Eastern European countries are interconnected. Ireland maintains its own grid as does the UK with England, Scotland and Wales. The Scandinavian countries have their own mutual supply.

This does mean when some of these countries generate an excess of especially renewable energy supplies, it can be passed on to other countries to contribute to their requirements. Which would seem ideal. But there are complications in this sort of shared generation and supply.

Europe And The Deseret Project 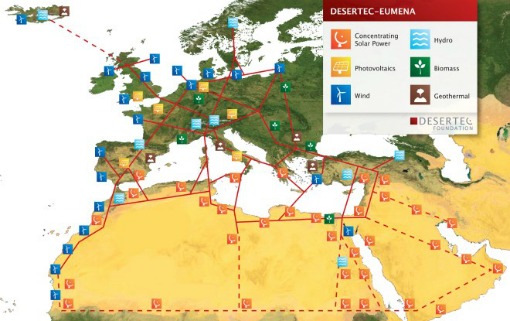 A major expansion on this idea of benefitting from interconnected electric power transmission lines is the Deseret project.

Initially designed for the Europe and North Africa region, with that transmission network estimated to cost $500 billion, the driving group feels that most of the world could benefit from the initiative. As much as 90% of the world's population.

So many live close enough to major deserts to allow solar-generated power to be supplied to them. With the relative clarity of the air, long sunlight hours and lack of population deserts are seen by the Deseret group to be an ideal solar power station.

Of course deserts are not "dead" areas. Using them for power generating units will have effects on local flora and fauna.

Ideas like the Gaia interconnected world need to be considered. That fine balance - the living unit the world has achieved to maintain life on its surface for so long - needs to be supported.

Using thermal solar power, with its much greater efficiency than photovoltaics will require less ground area. For most forms of this method of generation, the energy will be available after sunlight hours.

Only the Stirling generators, sited at the focal point of parabolic mirrors, will have sunlight hour power generation limitations. At least they are highly efficient.

Once generated, power is fed usually at around 2,300 to 30,000 volts, to the transmission station. Here the voltage is stepped up.

The higher the voltage, the lower the current to transmit the same amount of power. With losses in transmission being directly proportional to the square of the current, the lowest possible current produces the least wastage.

Electric power transmission lines voltage can vary from 110,000 to 1,200,000 volts or greater. To save on costs modern lines are often made from aluminium (uninsulated) rather than slightly better conducting copper. 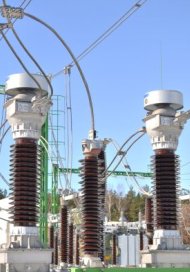 As most of the current tends to travel in the outer layers, they can be made hollow. Information-gathering fiber-optics can be located in the hollow cores to monitor and feed back temperature and other measurements that determine losses and risks associated with transmission.

The nature of alternating current with its requirements to mesh with the local supply, does limit its effectiveness over extremely long distances.

Cost-effective transmission is better over distances around 4,000 kilometres with direct current. DC is also better for underwater transmission, like that proposed by Iceland to profit from its excess generated geothermal power to Scandinavia and the rest of Europe.

A recent study found capital expenditure on electric power transmission lines and distribution equipment throughout the world to have been $128.9 billion in 2011.

Once erected, these systems add a minimal amount to the cost of supplying electricity - calculated at one half to two US cents per kiloWatt hour. Minor compared to retail charges for power at 10 to 20 or more cents a kilowatt hour.

I have covered the variability of electricity and the cost of production from various sources.

As far as possible future developments for electric power transmission lines, superconducting cables would allow rapid high volumes of power to be moved with much lower loss.

The most efficient way to do this would be using a pipeline already transporting liquid nitrogen or similar product. Casing wires with a coating to contain liquid nitrogen would be more problematic. Heating from high current loads would not be a problem. There would still be electromagnetic effects.

Strong electromagnetic health effects from high voltage electric power transmission lines has been a public concern for years. People have been concerned about possible brain tumors. The greatest concern has been in children living in homes, or at school and daycare close to transmission lines.

A huge study of half a million people who lived within 300 metres of high voltage lines from 1960 to 1985 was conducted in Sweden. The results from the epidemiologist researchers Maria Feychting and Anders Ahlbom of the Karolinska Institute were released in 1992.

For this retrospective study (which carries less weight than a prospective one) the only event that showed a change was in children, with an increased risk of leukaemia. There was no effect in adults. The risk was small, and therefore more subject to error even in such a large sample, at one in every 20,000 children a year.

But there was a correlation with the strength of the electromagnetic field (related to proximity to the lines). A milligauss (unit of magnetic field strength) had the lowest incidence, two milligauss gave a triple risk with three milligauss carrying four times the risk.

With the rapid decrease in electromagnetic field relating to the square of the distance from the source even moving children to another side of their bedroom could make a significant difference. 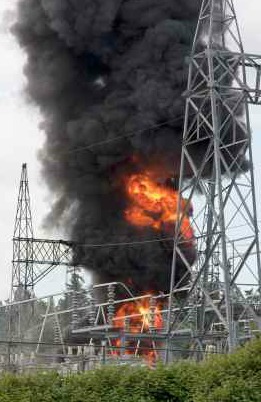 Another study of just over 1,600 men with brain tumors and leukaemia was also run around this time. The amount of work exposure to electromagnetic radiation seemed to correlate in those with leukaemia, but not in brain tumors. Numbers were relatively small.

The results of the first study were of enough concern for the Swedish government of the day to initiate a task force to look into the location of schools and day cares near electric power transmission lines.

Grid arrangements are useful for redistributing power according to need. Having a more web-like interconnection allows for bypassing and alternative routes around problem areas.

Being reliant on a large grid can make power supply vulnerable to terrorist or other attack. The more alternative lines there are, the less likely such an attack would cause a problem.

By restricting gas supplies to the Ukraine Russia exerted pressure on presidential elections to ensure a Russian-friendly candidate was voted in.

How secure will multi-country networks be in future years?

What is the chance of going without electric power transmission lines? 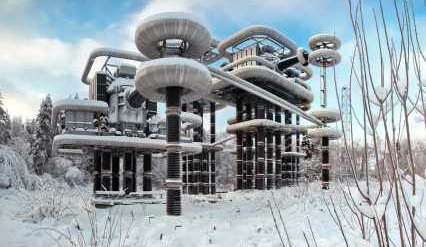 Reading on his attempts to establish the system it is still difficult to understand exactly how it would work.

Maybe someone will build his idea, or a development of it, in the future.

Otherwise there are the proposals of a grid-free power generating system, by using available sunlight, other renewable resources and nanotechnology.

It would be aesthetically pleasing without transmission lines and create individual independence. Some inter-connection would allow for sudden high local demand fluctuations.

Another consideration in avoiding an over-dependence on grid-like electric power transmission lines, would be to have a safe, scalable, efficient, cheap, always available power generation source with a limited footprint.

Such units could be placed amongst residential areas, in small villages, networked as needed, or even mobile.