Biomass fuel production has begun in some places with claims for renewable fuels with higher octane ratings than petroleum products and greater facility in creating designer versions. Some companies involved have been supplying major clients. Big name companies are associating with the production.

Another new contender promises an even cheaper production process.

In nature, petroleum came from prolonged underground remodeling of plant material. It has been the ultimate illustration of biomass fuel production - that producing oil-related products from vegetation is indeed posssible.

Research institutions have produced papers confirming oil production from biomass treated under high pressures. In a moist environment, with reducing agents like hydrogen and carbon monoxide, in the presence of a catalyst, oil products could be produced.

Various petroleum products have been produced from biofuels for some time. Using various plant oils and other methods quite a number of these initiatives are in place and being explored further.

There are some limitations and problems with these options. If we could use non-food waste products and plant material from areas that are not useful for food production, then there would be major environmental advantages.

Being able to get more than just ethanol from starches and biomass opens up many future possibilities.

In my exploration of what is out there for biomass fuel production I have come across four significant biomass fuel manufacturers. Two of them are working in association with each other. The other two seem to be mainly managing with their own in-house technology.

In 2001 Randy Cortright was working as a scientist at University of Wisconsin on research for the large Cargill multinational food, agricultural, industrial products and services company. His brief was to develop an anti-freeze material from organic acids.

In the process he came across a key to turn biomass into fuels. A year later he left the university to found Virent where he is the chief technical officer.

By the end of 2008 the company was producing two litres of gasoline a day. Within three years it was  producing 10,000 gallons a year with a staff of 100 at its Wisconsin demonstration plant and is aiming for 10 million gallons (38 million litres) a year.

It has expanded to three production plants in two continents with increasing volume of sales quarter by quarter in 2014 (43% from $11.2 to $15.9 million).  Being in development it still operates at an overall loss.

All Diagrams Except Last Courtesy of Virent

Its process, known as Bioforming®, can treat aqueous hydrocarbons to produce fuel products that can be added to current fuels.

These have been tested in a number of situations to the extent that as well as Cargill, Shell and Honda have become strategic investors.

It is interesting to note how Shell has sold off its distribution stations in New Zealand. Is there a shift going on to liberate funds for biomass fuel production?

All feedstocks should be able to be processed through Virent's Bioforming® process.

This involves a unique Aqueous Phase Reforming catalyst - the technique discovered by Randy Cortright while at the University of Wisconsin - with a Virent-modified acid condensation catalyst. Soluble carbohydrates undergo catalytic de-oxygenation.

Some of this is similar to petroleum refinery processes. It allows for the the creation of a range products.

The process is designed to be continuous, requiring only a few hours to produce up to 90% of the products that can be extracted from ground-extracted petroleum. These range from petroleum gases to oils, gasoline and jet fuels. 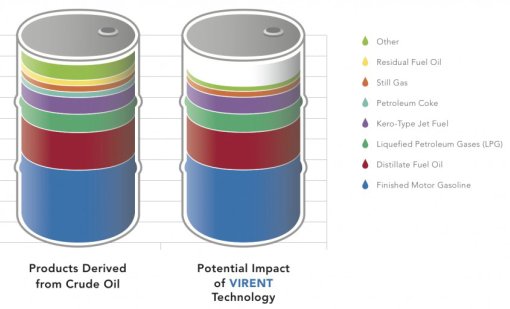 Further processes can be applied to the products to manufacture oil-related products as noted further below.

In 2011 it won a financial award to work with HCL CleanTech to produce products from biomass even more cost-effectively.

At their demo unit at the Southern Research Institute in Durham, North Carolina, HCL Clean Teach uses concentrated hydrochloric acid to break down all biomass fuel sources into sugars with 97 to 98% extraction rate of available sugars. Also produced are lignin and tall oils (useful for biodiesel production). This can be achieved at room temperatures around 10oC.

They have developed an intermediary extractant that removes the hydrochloric acid, without extra water consumption, releasing it for further use. The extracted lignin can be used for energy needs within the plant.

Virent has had the gasoline it has produced tested by Royal Dutch Shell.

Five identical model cars for each regular gasoline and Virent's biomass-produced version were driven for 10,000km through 2010. At the end of the tesing their engines were dis-assembled and examined. Shell reported "no harm" to the engines using the alternative fuel. 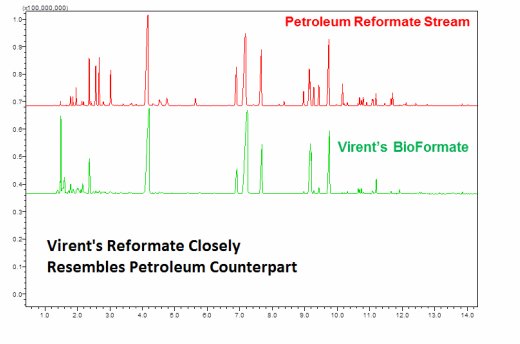 Virent's spectrographic analysis of their fuel comparing it with refinery-produced gasoline shows its close fit. There are some peak differences, but the overall profile is similar.

Its jet fuel product has been analytically tested at the US Airforce Research Laboratory at Wright-Patterson AirForce Base with results suggesting it is fit for for further testing as a 50/50 blend with jet fuel and even as a 100% replacement.

Further impetus has been created by an award from the US Department of Energy of US$13.4 million to further explore conversion of the dry remnant corn stover to jet fuel.

Petrochemical-type products from Virent's biomass fuel production can be further treated by aromatics and a number of other processes to create synthetic products.

In June 6, 2011 they announced they had successfully made paraxylene (PX - trademarked as BioFormPX™) from plant sugars. Paraxylene when combined with existing renewable-based monethylene glycol can produce 100% renewable polyethylene terephthalate (PET) resins.

PET technology is used in the production of rigid and flexible packaging, tapes and discs. This gives the ability for these products to be created as a 100% plant based renewable technology.

Of great interest in what it has achieved in biomass fuel production is Solazyme based in south San Francisco, CA.

Their co-founder, president and chief technology officer, Harrison F Dillon, is the inventor of over 30 of the company's patents and patent applications.

Their technology is based on proprietary heterotrophic (non-photosynthetic) micro-algae. Being heterotrophic means they can grow in the dark, digesting biomass materials in large sealed vats and silos.

Solazyme's algae body mass is over 80% oil-based, compared to usual proportions of 5 to 10%. Within a few days they can be harvested to produce a wide array of oil-based products.

SoladieselBD® and SoladieselRD® have been road-tested over thousands of miles in unmodified vehicles and meet current US and European fuel specifications.

SoladieselHRF-76® has been supplied to the US Navy from 2010 for testing as renewable diesel for its ships.

Solajet™ has also been supplied for US Naval testing and certification, currently meeting military and commercial specifications.

Mirroring Virent and the other areas that can be developed in biomass fuel production Solazyme is also exploring nutritional, health and other chemical applications of their technology.

Within the chemical applications Unilever and Dow Chemical are working with Solazyme in further research and development - Unilever in using the oils for soaps and personal care products, and Dow Chemical Company for producing dielectric fluids.

There are some major new encouraging developments within biomass fuel production that suggest we may not be far from being able to create significant replacements for ground-derived petroleum products. 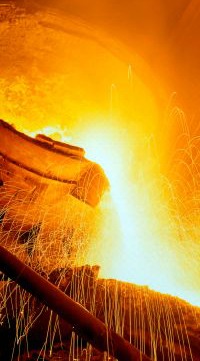 A new entrant in the field of biomass fuel production is emerging with its own proprietary technology.  Having already been awarded prizes for its green initiatives, it promises to shake up this field even more.

Founded in 2006 by a lawyer, Nick Gerritsen, with experience in advising corporates on intellectual property matters and running his own businesses, CarbonScape recently signed a contract to supply New Zealand Steel in Glenbrook, on the outskirts of Auckland with green coke.

This is produced in its South Island base in Malborough.

Designed to utilize biomass waste products in a cheap, rapid, simple process it can deliver far more than green coke. 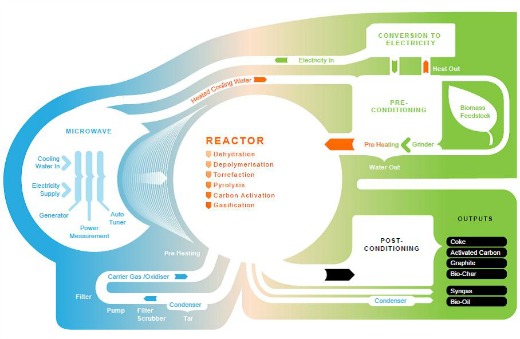 Image of Process Courtesy of CarbonScape

Raw materials like sawdust are fed through a heating process first to remove any moisture.  Heat is generated from cooling of the microwaving process.

At this point catalysts can be added to tailor the final product delivered.  Such tailoring enables the process to respond to delivering according to changing market demands.

The dried product is passed into the microwave section.  Microwave heating produces a number of products including plasmas (ionized gases as used in fusion power) which further refine the biomass.

The reactor part of the process builds on the microwave section.

Initial lower temperatures produce bio-oil products as a gas.  When liquified this oil-like product can be further processed, as in the companies above, to specific fuels.  Having dried the biomass initially these bio-oils have extremely attractive profiles.

Further heating produces charcoal, such as the green coke, and biochar which can be used in agriculture applied to fields to bind water and added nutrients, improving the soil.  The biomass has not produced air-released carbon dioxide, effectively keeping it in the soil.

Further heating with steam can produce a highly refined and efficient activated charcoal which is useful in many chemical processes.

As a further by-product from this final step, syngas is produced.  The syngas is used to generate electricity for the process which allows the plant to produce enough energy to run off-grid.

Biomass fuel production is becoming ever more possible with an even cheaper and more efficient process than those above.