Cellulosic ethanol has made headlines in recent times due to its unobtainability in spite of legislation requiring its use in the USA. Oil companies are being levied for their failure to incorporate it into their fuel.

The 2007 Energy and Security Act promoted by President George W Bush was supposed to facilitate US energy independence by setting targets for increasing the use of ethanol derived from cellulose mixed with regular gasoline. 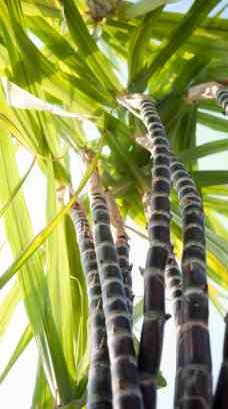 Ethanol has been widely available for a number of years. The shining example has been Brazil with its wide adoption of ethanol its fuels. This form is derived from Brazil's large sugarcane harvest.

With its more tropical climate sugarcane can be grown readily and rapidly. Obtaining ethanol from easily accessible sugars is relatively straightforward.  It is the basis for the recreational alcohol industry from beers to wines and spirits.

In the USA there has been a large commitment to agriculturally derived ethanol. Most of this has been from corn or maize. Corn kernels have readily accessible corn starch which is rapidly fermented to produce ethanol.

There are two main processes - a dry and a wet one. The dry process accounts for 80% of the US production methods. In the dry method the corn is ground, slurried with water, enzymes added to break the starch to dextrose which can be fermented by yeast.

In the wet method the grain is placed in water and sulphuric acid which breaks down the components which are separated, leaving corn starch which can be fermented.

One large company in the USA that began this process in the 1980s and grew hugely from an initial recommissioned ethanol plant was Broin Enterprises later known as POET. From this one plant it grew to a huge company now a network of 27 plants across seven states and producing over 1.6 million gallons of ethanol annually. 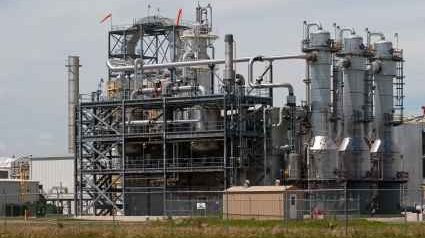 Using the dry method with enzymatic breakdown of ground corn, it produces ethanol, a residue that can be dried and used as livestock feed, and carbon dioxide. Past maintenance to ethanol plants in Australia led to a lack of carbon dioxide to produce the usual quantity of carbonated beverages.

Use Of Food Productive Land

Other countries, especially around Europe, use sugar beets for their base.

A major problem with ethanol from these crops is that arable land useful for food production is diverted to the production of energy. Many have voiced concerns at the effect this has had on food prices. Reflecting this the proportion of corn harvest in America used for ethanol production rose from 6% in 2000 to 40% in 2011 (noted to be enough to feed 350 million people!). 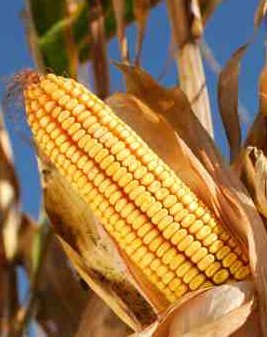 Maize as grown for ethanol production

A salutory twist in the corn for ethanol race is the development of disease in specially genetically modified corn.

The Bt variety, designed to produce its own natural insecticide, was introduced in 2003. By the end of 2011 it represented 65% of planted US corn.

Rootworms have been found recently, suggesting they have developed resistance to the varietal's natural insecticide.

At least partly to blame for this appears to have been the lack of crop rotation which reduces this risk.

With these effects comes the pressure, or simple intelligent swing, to seek to produce cellulosic ethanol.

Cellulose As A Base

What is cellulose? It is the basis of the cell wall of plants. Basic cellulose is a polysaccharide - a long chain of sugar molecules - in this case glucose sugar units. About 20% of plant mass is composed of another component - hemicellulose - which is a shorter chain and branched polysaccharide composed of a variety of sugar molecules from the usual glucose to xylose, mannose, galactose, rhamnose, arabinose.

If all types of plant matter could be broken down to cellulosic ethanol then material that is currently waste such as corn "stover" - essentially the leftover of the corn production like husks, leaves and stalks - as well as grasses, chippings and trimmings from forestry areas could be used. This would not take away from viable food production land. And waste from food production could be used.

The problem in turning these products into cellulosic ethanol is the strong chemical bond connecting the glucose units and other sugars together. We digest very little of the cellulose in our diet. It tends to benefit us as roughage.

Ruminants like cows, sheep, goats etc get their food from cellulose material by digesting it in their gut with the aid of bacterial breakdown. Termites can digest wood with the aid of a flagelate protozoan living in their hindgut. Fungi produce enzymes to break cellulose down.

Early methods of breaking these bonds employed concentrated hydrochloric acid - the same as our stomach acid - to begin the digestion process.

This is essentially the method used by HCL CleanTech at their demo unit, the Southern Research Institute in Durham, North Carolina. This releases sugars, lignin (woody residue that can be burned for any energy needs of the unit) and tall oils - from the Swedish "tallolja" for pine oil. The tall oils can be processed by alkalinization to soaps and other substances.

Another method to break the bonds is the Lyocell process using heated water and acetone.

Argonne National Laboratory, a part for US Department of Energy program, and associated with the University of Chicago has many research initiatives. One avenue is identifying tree and other species that could be grown in marginal land to produce products for cellulosic ethanol. It is exploring ways to produce ethanol from cellulose, noting that the price of ethanol is only 50% that of gasoline. Despite this ethanol prices in the US are considerably higher than those for the same product in Brazil.

POET, mentioned above, has begun production of its own cellulosic ethanol at its original plant in Scotland, South Dakota. Using an enzymatic process it can access 25% of the feed stock, leaving 75% for recycling to the ground.

Its Project Liberty will launch its first full cellulosic ethanol plant in Iowa from local farm corn husks, leaves and stalks in 2013. With a $100 million grant from the US Department of Energy and $20 million from the state of Iowa, it aims to be producing 25 million gallons of ethanol a year. At this point it aims to be able to reduce costs to $2.00 a gallon.

Environmentally ethanol degrades readily if spilled. More spectacular events such as the train crash in Illinois in October 2011 with ethanol wagons involved have a greater immediate concern.

There has been argument about the carbon footprint of ethanol, some claiming it is higher than that of petroleum products. It produces carbon dioxide in its manufacture and its burning. Harvesting and transporting it again produces more carbon products. Fertiliser use and water run-off from irrigation contribute to environmental effects.

The US Department of Energy states that corn-starch produced ethanol has a 20% lesser carbon footprint than gasoline. It also claims an 86% reduction with cellulosic ethanol.

The energy density of alcohol is less than gasoline, meaning a greater quantity needs to be combusted to create the same effect - less travel for the same volume of fuel.

As well as cellulosic ethanol from waste plant matter, other combustibles can be produced which challenge the oil industry. This is examined in a further page.