The Gaia Greek goddess is imbued in the gaia mother earth concept that lent its name to the hypothesis now accepted as theory. Her name has a number of variations from Gaia to Gaea, to Ge and Ga. Even her underlying Olympian myth has a number of alternative versions.

Essentially, though, Gaia as mother earth arose spontaneously out of Chaos, the primordial soup of the universe. Without sexual union she produced her son Uranus, the god of the sky. 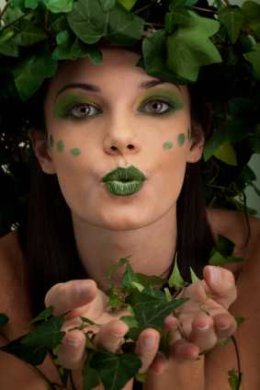 Gazing down upon her beauty Uranus wept rain into her deep furrows producing the world's life as we know it - animals, birds, trees, flowers and grasses. The continuing rain gathered into rivers which then flowed into hollows to produce lakes and seas.

In line with the Olympian gods' common mores Gaia mother earth slept with her son Uranus producing both a number of hundred-armed giants and three single-eyed cylcops. The cyclops became builders of walls and manufacturers of various essential items like swords and spears.

Not liking the appearance of these sons he had produced, Uranus cast them into Tartarus, the early-created underworld.

Further sexual unions between Gaia and her son, Uranus, produced the Titans.

Unhappy with her early sons being imprisoned in the underworld and the continued advances of Uranus, Mother earth, Gaia, requested her Titan sons to deal with him. Most were unwilling to do anything.

However the youngest, Cronus, took a sharp flint sickle and waited for Uranus's appearance. When he came home, immediately going to couple with Gaia, Cronus advanced, grabbed Uranus's genitals with his left hand (forever cursing that hand) and cut them off.

The blood falling from the wound of his father onto mother earth, the Gaia greek goddess, below produced progeny in the three Furies.

Once Uranus had been castrated, the other Titans rose up to overthrow his rule. They released the hundred-armed giants and the Cyclops from Tartarus as their mother earth had wanted. At the same time they installed Cronus as ruler of the earth.

As soon as he was established as ruler, Cronus again confined the giants and cylcops to Tartarus. In response the Gaia Greek goddess prophesied that one of the sons born to Cronus would dethrone him.

Cronus partnered with his sister Rhea. Each time she delivered a child, to prevent the prophesy being fulfilled, Cronus swallowed them.

However his third son from Rhea was born at night. Under cover of darkness mother earth, the Gaia Greek goddess, carried this progeny, Zeus, away to a cave in Crete. 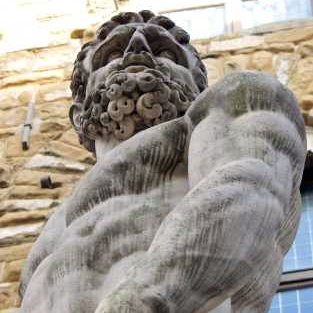 Wrapping a stone in cloths Rhea presented it to Cronus as the newborn child, which he promptly swallowed.

Nursed by nymphs and protected by other prior sons of Rhea, Zeus grew into manhood. On the advice of a Titaness he asked his mother Rhea to be made a cupbearer to Cronus.

At one time while giving his father his drink, Zeus slipped in an emetic, causing Cronus to vomit up the previously swallowed stone, the daughters and sons. His grateful siblings asked Zeus to lead them in a war against Cronus and his Titan brothers and their descendants.

A ten year war ensued. During it mother earth, the Gaia Greek goddess, prophesied victory to Zeus if would again release the hundred-armed giants and the cyclops from Tartarus, which he promptly did.

Gifts were presented to Zeus and his previously swallowed brothers by the grateful cyclops. Zeus received his thunderbolt, Hades the helmet of darkness and Poseidon his trident. With their new gifts they overthrew and banished Cronus.

The released giants and cyclops helped subdue the other Titans who were then confined to Tartarus guarded by the giants. Atlas, the chosen Titan leader, was punished by being given the world to always bear on his shoulders.

In line with that grand Olympian tradition Zeus pursued his twin sister Hera's affection. Initially she rejected him.

However, disguising himself as a bedraggled cuckoo, caused Hera to take him up to her to her breast. Whereupon Zeus assumed his real form and raped her. In doing so he shamed her into marrying him.

The Gaia Greek goddess myth incorporates ideas of the initial beginnings of the earth with interactions of the elements establishing life. An almost incestuous co-operation and interaction of the various parts generates, sustains and protects life.

Sequential administrations are established with help from mother earth. To those who can hear, she foretells and aids in these transitions.

Actions that affront her cause her to scheme to deal with the offenders.

As we establish methods for alternative energy generation this concept, embedded in the Gaia Greek goddess myth, should guide our directions. Uncaring choices threaten to bring an earthly response that could shake us from our position of apparent power.