Gaia Hypothesis
The Living Organism That Is Earth

The Gaia hypothesis, postulated in the late 1960s by the English chemist James Lovelock, proposes earth as a giant living organism or cell, maintaining the life within or on it. Initially dismissed and ignored as unscientific it has become accepted as a good working theory that has been experimentally confirmed in a number of aspects.

Prior understanding of the links between organisms of the earth, rock formations, production of gases, and the oxygen and carbon dioxide cycle had been well understood over the period of the century or so before. The hypothesis became a broader extension of this. 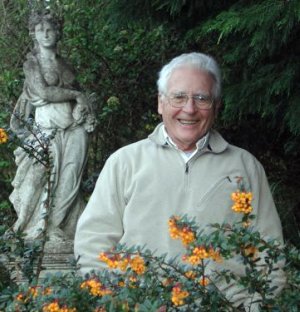 James Lovelock (born 1919) attributes his ability to conceive this idea to his wider education. With inadequate finances he was initially unable to pursue university studies.

Working at a photography firm during the day enabled him to study nights at Birbeck College. Following this he managed two of the three years University of Manchester chemistry course.

Through his subsequent job at the British Medical Research Council he developed ways to shield soldiers from burns. Initially avoiding service in World War II, Nazi atrocities stirred him to enlist. His work on burns was considered too valuable. He was urged to continue with it.

Following the War he received a PhD through the London School of Hygiene and Tropical Medicine. He went on to do research at Yale, Baylor College of Medicine in Houston Texas, and Harvard.

He became a consultant to NASA for planetary exploration. From the 1960s to the 1970s he was involved in NASA programs to develop sensors and instruments to sample and analyse extra-terrestrial atmospheres. He was closely involved in the Viking program to Mars.

James Lovelock's opinion was there was unlikely to be life on Mars due to the composition and chemical equilibrium of its surfaces gases. There were low percentages of oxygen yet high levels of carbon dioxide.

This strongly contrasted with the balance of gases observed on earth. With oxygen stable at around 20% of earth's atmosphere, life could burn fuel for energy requirements.

His walking companion in Bowerchalke in England was the school teacher become author William Golding who had moved there in 1958. William Golding (1911 to 1993) achieved fame with his 1954 metaphorical, widely studied Lord of The Flies book. Further parable-like novels followed. He received the Nobel Prize for Literature in 1983, the Booker prize in 1980 and was knighted in 1988.

While walking and discussing their ideas, William Golding, with his background in literature and myth, suggested to James that he name his evolving hypothesis on the inter-connectedness of life on earth after Gaea, the Greek goddess, the earth mother. James Lovelock has always attributed the naming of the Gaia hypothesis to the suggestion of his friend.

At the same time the use of the name has caused some initial resistance to the idea.

Another noted scientist who joined with James Lovelock in the proposition of the Gaia hypothesis was Lynn Magulis (1938-2011), a US microbiologist.

Lynn Margulis on the Gaia hypothesis.

Famed for her proposition of the evolution of organelles in organisms by symbiotic associations proposed in 1966 three years after she was awarded her PhD from UC Berkeley, she endured similar scepticism toward her ground-breaking ideas. The paper was initially refused publication by a number of journals.

Her theoretical work had been based on observations, much like Lovelock's.

It was not until the 1980s it could be demonstrated that mitochondrial genetic material differed from that of the cell nucleus. This lent credence to her ideas, which she held firmly over many years of opposition.

The similarity of a symbiotic association of organelles to produce a cell, to the interconnected, cell-like homeostasis of the earth in sustaining life in the Gaia hypothesis would produce sympathy for the idea.

It was James Lovelock who had measured the widespread existence of chlorinated fluorocarbons in the atmosphere. Initially feeling they were inactive, it took others to reveal their effect in the stratosphere. Ultraviolet light at that level releases chlorine which interacts with the protective ozone. Ozone holes were the result.

Apart from this observation, it was noted how stable the earth's surface temperature had remained over billions of years despite increased heat output from the sun.

The sea likewise seemed to maintain a near uniform degree of salinity despite the earth's rivers constantly depositing more solute year by year. Evaporation from this salty soup would be expected to produce an increasingly salty composition which would be less compatible with most life - as in the Dead Sea. Some biological process must have been removing the solutes.

Strongly oxidative oxygen, as mentioned before, present at around 20% of the atmosphere, should interact more with environmental chemicals. Along with this the continued presence of methane, which is highly flammable in the presence of oxygen, mystified Lovelock.

In his Gaia hypothesis Lovelock originally considered only living organisms. With time, this expanded to include geological formations as well.

He proposed organisms producing methane initially protected the earth from damaging ultraviolet rays until oxygen production with associated ozone was present to assume this role.

The contribution of Lynn Margulis with her understanding of microbiology was useful to complement Lovelock's more chemist's background.

Apart from the well-known respiratory and photosynthesis cycles, there are a number of others.

A large proportion of carbon dioxide is dissolved in seawater - cooler water absorbs more. Earth's thermohaline sea circulation which encompasses the world, keeping sea composition uniform through the world, drags surface water down to the ocean floor at certain points.

Over time a good deal of the fixed carbon dioxide accumulates on the ocean floor, along with structures of marine organisms that incorporate it at times shedding parts as they grow or sinking as they die. This helps to form limestone, part of earth's geologic structure.

In the face of some opposition to his Gaia hypothesis James Lovelock developed his daisyworld illustration.

Part 1 of Daisyworld in relation to the Gaia hypothesis

For this he imagined a population of daisies, some white and some black. As the earth's suface temperature increased he imagined a greater proportion of the white daisies being produced.

The colour white appears that way through reflection of all visible wavelengths of light from its surface. This will reduce the temperature effects of the sun. As a consequence the earth's surface temperature will decrease.

Black daisies will flourish more. Black, absorbing all the visible light spectrum, converts this light energy to heat energy, increasing the temperature of the earth.

This in turn will favour the growth of more white daisies causing the reversing of the temperature again.

Observations over time have shown that many species are important in this daisyworld concept. More biodiversity produces greater stability within the Gaia hypothesis.

Studies in grasses have shown greater biodiversity allows the survival of the grasses generally. More drought- and heat-resistant varieties will survive this extreme. Likewise those more tolerant of lower temperatures will flourish in cooler years.

Many micro-organisms produce cycles which allow for the recirculation of elements within the earth both from rocks to air and from sea to earth. This recycling allows life to flourish in a dynamic self-sustaining way.

Within the Gaia hypothesis idea are a range of opinions on the strength of the process.

At one end are those who favour simple opportunistic evolving patterns responding to changes.

At the other end are those who see an over-arching principle seeming to guide life in all its forms on the earth to produce an environment most conducive to life continuing and improving.

Wherever people fit in the continuum of opinion, the Gaia hypothesis has produced a structure for cross-disciplinary fertilisation of ideas and dynamics.

It has also further stimulated ideas on ecology and environmental care.

Even the simple understanding of the importance to earth's homeostasis of multitudes of organisms maintaining a fine balance alerts us to the need to have a wide-ranging understanding of changes we cause.

The maintenance of biodiversity for sustaining life should alert us in decisions for food and energy supply. Short-term gains must be balanced with long term protection.

Beyond this is the possibility of further discoveries in this complex world that could benefit us even more. The Gaia hypothesis generates hope in a symbiotic world geared for seeking the good of all in it.