Geothermal Energy Cost
How Much For Free Heat?

Geothermal energy cost structure reflects the effectively free nature of the fuel to run it and its accessibility in setting it up. Costs also are affected by location in the world and whether it is for personal residential use, for community heating, or community power generation. 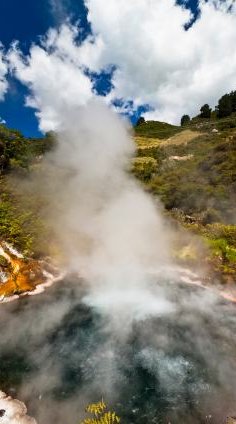 As noted in the information on geothermal power, the internal heat from the earth provides a continuous, virtually unlimited source of effectively renewable power.

Earth's internal heat remains partially from its fiery origins - probably about a fifth - with the rest provided by elemental radioactive decay.

If all the heat being generated could be utilized it would provide around twice our current power requirements. But it exists spread throughout the full area of the earth's crust. We cannot avail ourselves of it all.

Historically, and in more recent times, the earliest applications of geothermal energy have been in geothermally active areas around tectonic plates.

The very earliest uses were for warm bathing and providing heat for homes.

Where geothermal heat effectively breaks the surface utilising it carries very little cost other than running pipes from it.

When employed for power generation efficiency is at 10% to 20% or so.

Using geothermal energy for individual houses usually involves heat pumps. Sweden was the first country to adopt this in a major way, triggered by the 1970s oil price shocks. Even today they remain a major user. More countries are joining them.

Using geothermal heating for under-floor warmth, though slower to respond to demand, requires a lower-powered heat pump than those for radiators. Running costs can be just under a third to a quarter those of other forms of central heating.

Geothermal energy cost for community heating projects where the ducted warmth is directed from active geothermal sources is mainly dependent on the piping required. Generally the closer the individual units and dwellings are to each other the cheaper they are to build.

Once established any ongoing costs relate to electricity required to power pumps and compressors. Plus maintenance of pipes. Examples of piping costs run around $1300 to $1500 a kilowatt of heating.

Other examples of using heat directly occur with combined heat and power generation as utilized by providers such as Opus Energy. 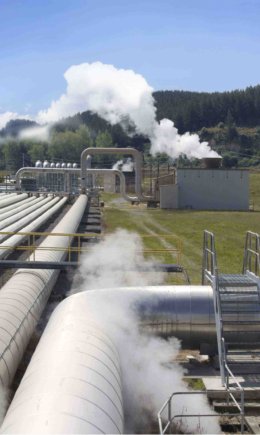 Energy generation can be timed for demand periods. This flash steam method requires water above 180degC.

In the binary approach much lower temperature water can be used. This is heat exchanged with a low boiling point liquid like an alcohol. When this is vaporized it can drive turbines for power production.

The lowest temperature water used in binary generation so far is at 54degC at Chena Hot Springs in Alaska.

The latter method suits geothermal power generation in areas away from usual geothermal activity. By drilling vertically into the earth's crust, increased temperatures can be obtained. On average there is a 25-30degC rise per kilometre of depth.

Average drillings for this sort of geothermal generation are around three kilometres. At this level warmth can be harvested from underground water sources - aquifers.

Or, more efficiently, water can be injected into dry rock and harvested some distance away by another pipe. Usually this requires some hydro-fracturing of the rock at that level to establish channels.

Part of the geothermal energy cost of such an approach can be earth tremors as occurred in Basel, Switzerland. Over 10,000 seismic events of up to 3.4 on the Richter scale through a six day hydrofracturing period were recorded. Further work was ordered to cease.

The efficiency of energy generation is lowest with the binary approach - around 10% to 13%. The other two forms are around 10% to 23% efficient.

Efficiency can be improved by diverting the residual heat to other uses such as warming greenhouses and for industrial and heating applications.

The cost of drilling varies somewhat with the depth required. The wider the bore of the drilled hole, the more efficient it can be.

The geothermal energy cost range for power stations is $2,500 to $6,500 per kilowatt production. Drilling requirements for the binary version pushes that cost to the higher end.

Once established there is little ongoing cost for fuel. There is wear and tear on pipes and related equipment.

Geothermal power becomes really renewable when the harvested water is returned to the ground from which it came. This tends to replenish the fields it is drawn from, prolonging their life.

It avoids one of the costs showing in New Zealand's original field in Wairakei. Energy generation from this field has fallen over its decades of use. Along with this some ground subsidence has occurred.

Reducing the out-take from the field and re-injecting water could return the field to former levels. Other nearby fields are being brought on-line to replace the original one.

Water drawn off from geothermal sources tends to have other substances dissolved in it. One part of geothermal energy cost is in dealing with these.

Carbon dioxide, the sulphurous-smelling hydrogen sulphide, methane and ammonia as well as at times mercury, arsenic, boron, antimony and salt can be found in the water. If drawn off completely then there need to be methods to deal with all these by-products. If harvested water is returned into the ground then there is less of a problem.

The dissolved gases will be released with the lower pressures occurring in the more open dry and flash steam options as noted in the carbon footprint for geothermal energy.

Another consideration of geothermal energy cost is in the requirement for other resources - water and land.