The HiPER power supply project, Europe's main initiative in inertial nuclear fusion, has links to the large USA project. Lawrence Livermore Laboratories' National Ignition Facility (NIF) is sharing design and results with the HiPER power supply project to multiply the benefits to each development. HiPER is relying on the initial fusion results produced at the National Ignition Facility to prove the concept as workable.

As noted elsewhere the hydrogen fusion bomb successful testings in past weapons programs has shown an inertial fusion approach does produce results!

Beginning with an agreement in 2006 HiPER, standing for High Power laser Energy Research facility, is still in the planning stage. The UK has assumed a leadership role and at present is the likely site for the facility. 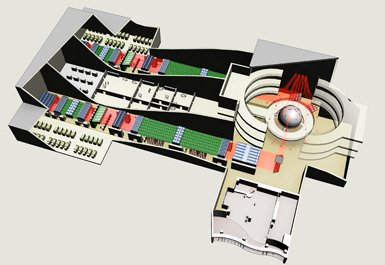 As the unit fuel is so much smaller than prior military applications it can be run as a civilian project.

Institutions from the UK, France, Spain, Greece, Czech Republic, Germany, Italy, Poland, Russia and Portugal are involved and there is collaboration with China, South Korea, USA, Canada, Japan. Both Lawrence Livermore Laboratories and General Atomics are involved from the USA.

With agreement from the European Community, initial planning for the facility was scheduled to take place over three years, hoping to mesh with the anticipated timing of results from NIF by 2011 to 2012.

All going according to plan construction is expected to begin around 2014 with active operation of the concept plant in the early 2020s. Assuming success, power plant building would begin in the late 2020s, ready for production around 2040.  It is calculated to cost around €800 million.

For European input, the major precursor to the project is the PETAL laser in the Aquitaine region of France. Based around a French military research establishment it is providing further proof alongside NIF of the viability of laser-initiated inertial fusion. 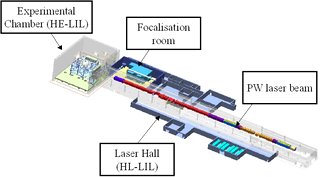 PETAL itself stands for PETawatt Aquitaine Laser. It can generate up to 3.5kJ over a pulse duration in the picosecond range from 0.5 to 5ps. The aim is to replicate the combination of beams to produce ignition of a fuel pellet for fusion.

Design parameters are talking of the energy for each laser compression to be at 200 kiloJoules and the ignition laser to produce 70 kiloJoules. Multiple synchronous beams are needed to provide this.

HiPER power supply aims to use multiple beams from long wavelength lasers aimed at a central point to massively compress the deuterium and tritium fuel pellet, producing one part - the high pressure. 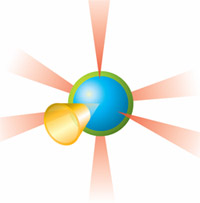 Then a short wavelength laser fires into the point or tip of a gold cone which is situated at the centre of maximum compression. This vapourises the gold tip to plasma, causing high energy electrons to interact with and raise the temperature of the fuel (as the second phase) to cause ignition.

The cone-directed secondary firing is a design idea that NIF is interested in considering for its own project.

There are a number of technical challenges.

The design requires the production of a large number of high energy beams to converge at one point from a number of different angles to cause even compression of the fuel pellet.

From there the igniting beam needs to be appropriately focused to cause fusion.

Then there needs to be a good short interval repetition rate for the lasers to produce a continuous sequence for effective power production.

Pellets and gold aiming cones need to be built in large enough number and rate to allow repeated firings in a continuous fashion.

The long wavelength laser is not expected to be ready until 2016.  To be cost effective the fuel pellets will need to produced at around half a Euro cost each.  Current costs are nearer 500 Euros now.

The gold cones need to produced in the same inexpensive way.

The target needs to be positioned each time for each subsequent shot - at the rate of many times a second.

The fuel is from water with the overview talking of using seawater to provide the hydrogen isotopes for the deuterium and tritium (the latter will likely need production from nuclear facilities). There are relatively short half-life radioactive products associated with this fuel.

Any interruption to power production will result in immediate shut-down of the fusion as with all nuclear fusion methods.

With a not too far distant time frame for achieving a working unit, the HiPER power supply is an interesting project that could provide a viable power generating station. There are a few hurdles to overcome.