The Hydrogen Bomb
Fusion On Show!

Although the hydrogen bomb was a bogey in the time of the Cold War, it did prove the reality of fusion. And it did give some indicators for possible approaches to the building of more stable energy generators.

One of the important results from exploding h-bombs is the proof of the higher energy production from fusion over the traditional fission reaction produced in the a-bomb. 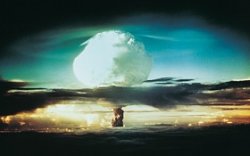 Weight for weight and even as a consideration of the amount of fuel required, the yield is so much higher - by a factor of a thousand times. And theoretically there is no limit.

To gain some idea of how the H-bomb was built and designed check out the following video.

This was Ivy Mike the USA's first hydrogen bomb test with explanations from the team there at the time.

Construction of the H-bomb illustrated some ways it might be possible to build a fusion means for power as seen in inertial confinement.

Design Of A Hydrogen Bomb

The construction has been based on creating enough energy to force a core of deuterium and tritium (although the exact construction is still classified) in on itself with intense compression to overcome the repelling forces of the positively charge protons in the nucleus. 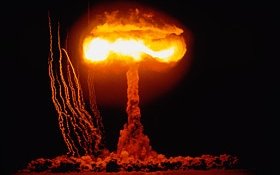 To compress the core a fission explosion was used. To cause a sudden energy release this would be the simplest method. It does carry the problem of yielding and scattering the radioactive results of a fission reaction. 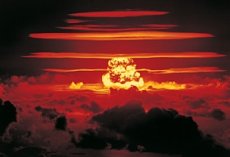 The largest ever H-bomb test was conducted by the USSR on October 30 1961. Scaled back from 100 Megatons to just 50 Megatons for safety's sake, it was still a huge explosion!

In more recent proposals less "dirty" ways have been suggested. With the limitation and nuclear reduction treaties there is less scope to test this idea.

To gain some idea from a human point of view of the scale and impact of a fusion explosion this following segment relating details on the first British thermonuclear test has been added as well.

As in the past the undesirable results in weapons and arms production the h-bomb has at least given insights into useful applications in unleashing primal natural forces for the good of the planet and us all.

For those interested in some great DVDs related to this topic I have included links to the two great ones I have enjoyed - the development of the various versions of the atomic and hydrogen bomb and a great well-produced BBC drama about one of the leaders in the development, J Robert Oppenheimer.