Hybrid solar panels can mean different things to different people. New technologies with layering of photovoltaic elements can make panels more efficient than conventional designs. I intend to look at these more under some of the solar research pages as most of the technologies are still at that level.

Another view is that a hybrid panel combines photovoltaic electricity creation with hot water production usually for water heating. In doing so efficiencies of the panels rise dramatically to 75% - a great result in any way of looking at extracting the sun's energy for our use.

There are a number of companies exploring these very useful technologies. One is standing head and shoulders above the crowd at the moment. 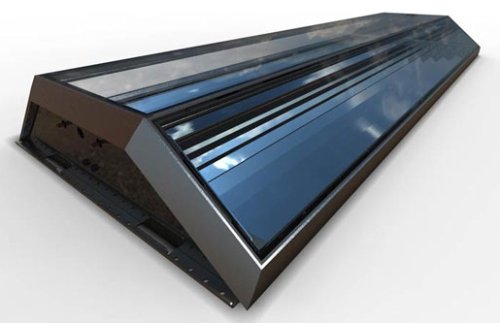 Images on this page courtesy of Chromasun

In commercial applications being used at present, though, actual efficiencies range from 10 to 18%. Not a great result especially when considering the area panels will have to cover to produce effective power. As well as the consumption of the substrates in panels at that size.

Efficiency of conversion falls with increasing temperature of the panels. Above 42oC there is a cumulative 1.1% loss in efficiency for every 1 degree rise in the panel's temperature.

A number of companies have attempted to overcome this. By having cooling coils under the panels, heat can be conducted away, often utilizing water. This heated water can then be used for further household and commercial purposes.

One such company, a Turkish origin one, now operating in Europe, Solimpeks has produced flat panels with a drum at the top end to contain the heated water. Reaching 150oF the water can be used directly. Panel efficiencies are said to reach 28%.

A similar style panel being produced in the US by Sundrum Solar is said to create efficiencies of 60-70%.

Another US company, Cogenra, claimed their system increased energy utilisation by five times over usual photovoltaic panels.  Their company was bought out by SunPower - so far there is no sign they are marketing a hybrid product.

SunScience Corp in Reno, Nevada began a pilot project with hybrid solar panels producing power and hot water aimed at the agricultural market. The panels allow growing of crops outside of usual seasonal periods. The first winter-grown crops were ripening in January 2012.

Another strategy pursued was joint research between Columbia University and a structural and mechanical engineering firm, Weidlinger Associates, seed funded with $150,000 from the Department of Energy.

With the aim developing a roofing tile that could be used to generate solar power they had a type of hybrid solar panel composed of multiple layers. With a top layer plastic coating, a photovoltaic panel situated beneath it, and a further layer of fine tubes below to heat water, at the same time cooling the PV panel above. Further layers to support the structure underlay these.

Expected energy efficiencies were only of the order of 12%. Once the design had been proven further more extensive funding was expected. There does not seem to be further information on this project, suggesting the initial pilot was not too successful.

Through the US Department of Energy, the Nobel Prize-winning current US Energy Secretary, Steven Chu has established the Sun Shot program. Its aim, with a couple of hundred million dollars a year funding, is to produce efficiencies in solar production to make it a viable alternative energy.

In Arizona, with its high sun exposure, solar power can now be produced at 10c a kilowatt hour, and in Europe at about twice that. Steven Chu would like to aim for 6c a kWh to achieve parity with other sources of electrical power.

Mirroring the effort behind the Moon shot, Sun Shot has a goal to achieve this level of efficiency by 2020! Hybrid solar panels would go a large way to achieving this. The focus with Sun Shot though seems more on improving photovoltaic efficiencies.

A variation on hybrid solar panels is research work being undertaken at Duke University. There Nico Hotz has been developing panels of copper tubes internally coated with aluminium and aluminium oxide. Water and methanol circulates in the tubes. Heating this mixture to 200oC and adding a catalyst, yields hydrogen which can then be stored in fuel cells for later energy use.

Another research project, this time at MIT, aims to focus solar energy by parabolic mirror onto tubes to heat water. This should then either drive turbines or by a thermocouple process, with the varying temperatures within the tubes, produce electricity. It was at the computer modelling stage by the end of 2011.

As a similar concept in using parabolic mirrors is an Israeli project by ZenithSolar Ltd set up as a solar farm around April 2009.

The energy generation part of these sun-tracking hybrid solar panels is a central 10cm unit at the mirror focal point with a photovoltaic panel and heat conversion unit. Calculated to achieve 76% efficiency each panel should produce 15kW combined electrical and thermal generation at 8.6c a kWh.

The panels were expected to cost around $29,500 each by the time they are available for residential and commercial applications.

An Australian company, Greenearth Solar Energy Pty Ltd, has signed a distribution agreement with ZenithSolar Ltd to introduce the panels into the Australian market.

Into all this innovation walks an Australian, Peter L Lievre, who had been developing systems in his own country in association with the Australian National University and University of New South Wales. 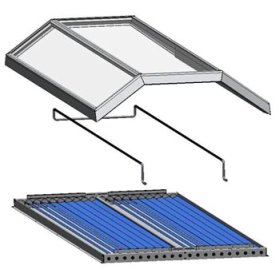 Looking for an environment to further his research as well as being closer to development finance he settled in Silicon Valley.

His company, Chromasun, has been installing commercial high-efficiency unique solar thermal units for some time.

With special Fresnel mirror directed sunlight reflection onto tubes at the top of the panels, the collecting fluids heat up to 400oF, 204oC. Whether water or another suitable fluid, this can be used to heat water for commercial and other uses or also to drive cooling units developed for the panels. Huge airconditioning benefits can be achieved.

Known as the MCT Hybrid - for Micro-Concentrator - these new hybrid solar panels are now available for commercial and residential applications. Only a few panels are required to provide complete power for a home. This includes electricity, hot water and cooling requirements.

The future for hybrid solar panels looks bright with much more efficient use of the abundant energy the sun sheds on the earth each day.