Hydrogen Economy News
The Future In A Bubble

Hydrogen economy news is driven by its clean-burning appeal. With oxidative combustion producing water as the emission what else could be cleaner? 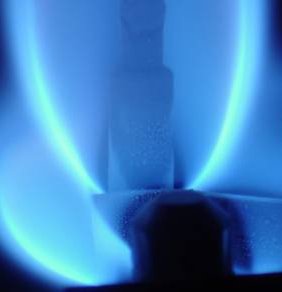 Newer technology is making the ready generation of hydrogen for use in energy production much more likely.

With hydrogen energy news there are a couple of problems as I have mentioned in the area of hydrogen as an alternative energy source.

One is the current situation where production of hydrogen consumes more energy than it finally produces as a fuel.

The second being the difficulty of storing and transporting this lightest and smallest molecule. It tends to interact with many metals and compounds like rubber rendering them brittle and less secure. And it leaks through the smallest imperfections.

In spite of this there are hydrogen filling stations being established in a number of places around the world.

Hydrogen fuel cell news has shown some interesting developments. Large companies like Google and eBay have bought a number of the Bloom Energy fuel cells, each around half the size of a regular shipping container, to serve as back-up power and to lower their carbon emissions.

As with all such fuel cells more substrate needs to be added over time. The Bloom ones are designed to run on a range of hydrogen-containing gases from methane to biodiesel, natural gas and other hydrocarbon fuels.

Other companies are developing much smaller cells designed to run cellphones and similar-sized gadgets.

Also in hydrogen economy news an interesting take from Takashi Yabe in Japan is his proposal to refine magnesium from seawater sources to combine with water, creating heat and hydrogen, as was so well demonstrated in those more exciting high school chemistry experiments.

It is in hydrogen technology news where the methods for creating hydrogen are causing the most interesting items.

As mentioned elsewhere in this site the majority of hydrogen production at present is from the oil industry where it is used in a number of processes. A major problem with this is the consumption of a limited resource for a product that in its preparation consumes more energy than it will generate.

Electrolysis from water has been the major alternative. But again, with our current technology, the energy requirements for this are higher than the resultant gas product will yield.

And the electrodes have become more complex to insure their integrity as they are employed in this environment.

In hydrogen economy news recent announcements from researchers pursuing artificial photosynthesis may change this pattern. In some of the latest hydrogen tech news an MIT chemist, Daniel Nocera, has published details on a relatively simple and renewable method for doing this.

By using simple and abundant substrates of cobalt and potassium phosphate in the water and an indium tin oxide electrode he was able to demonstrate a quite stable system.

The indium tin oxide electrode accumulates some to the cobalt and phosphate on the oxygen producing side. Platinum is still required for the hydrogen producing one. A small current is also required.

As the process continues the originally partially consumed cobalt and phosphate will be recycled and reconsituted within the system.

Having demostrated the viability of the system with widely available and simple substrates, the race is on to produce cheaper, more abundant material electrodes.

If this could be done without the application of an external current, just relying on the energy of incident sunlight, a very simple solar-powered system will have been produced.

As with photosynthesis the power of the sunlight would be being used to produce oxygen and hydrogen (although in plants the latter is tied up in the more complex NAPD - nicotinamide adenine dinucleotide phosphate - producing NADPH).

With some of these recent developments hydrogen economy news promises to yield some interesting future announcements.

If you would like to be up to date on artificial photosynthesis, then use this connection to get more detail.

If Bing is your thing for up to date news then you can follow the link on items related to the hydrogen economy.  This route will help you source more on artificial photosynthesis.

Have Some Great Hydrogen Economy News?

Do you have a great story about this? Share it!