Laser Fusion
Compression At The Speed Of Light!

Energy from laser fusion could be created by bombarding a plasma with intense laser energy. Aim many of these high energy beams into the plasma soup and sudden nuclear events look possible.

Playing with and utilizing lasers was what drew my attention to the possibility of using them to achieve viable laser fusion.

I remember the first time I had a chance to play with a laser. I was fascinated with the speckled pattern the beam would cast on a wall or object.

This is a special property of a laser beam. It can be incredibly fine, yet still have these bright and less bright spots within it. 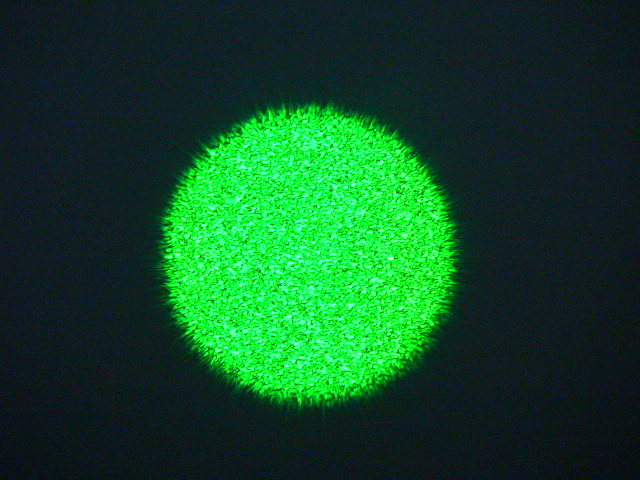 It does not matter what wavelength, or colour, the laser is its beam will have these speckles present. They reveal some of the inherent properties of laser light.

Lasers produce monochromatic (single colour) light with all the peaks and troughs of their wave form in synch with each other. Often, due to the way they are created, they follow a single straight line - collimation.

Some laser mediums produce more than one colour. The copper bromide laser produces a green 511nm and a yellow 578nm light. There are some pulsed dye lasers that can be tuned to produce a range of colours. And crystals can frequency double or triple a laser to produce say a 532nm light from a 1064nm (infra-red source).

The beauty of the precise colour (or wavelength) and the in-synch form of the waves is the possibility of interference patterns. These arise as the wave crests and troughs engage each other and produce exaggerated peaks and troughs of energy - energy multiplies in localised areas. These extra energy points allow more ready laser fusion.

With the collimation or focusing of laser beams an intense point of light can be created from a low-sounding power value. Compared to a light bulb or other sources of regular light, the energy at the aiming point of a laser, when compared to the power of its source is huge.

These properties make lasers ideal as sources for generating appropriate energy to create laser fusion. Aim a large array at a target point - huge energies can be concentrated on a pin point.

The target could then be a pellet or a gaseous plasma medium. By replacing the target after each laser pulse, or replenishing the plasma, a pulsed power generation could be achieved. The goal is to release more power than that is required to achieve fusion.

At present teams that are using this approach include the initiative at the National Ignition Facility at Lawrence Livermore National Laboratories. The facility was dedicated in May 29 2009. Aiming 192 high energy laser beams at a deuterium and tritium pellet target, the facility was aiming to achieve fusion in 2010. 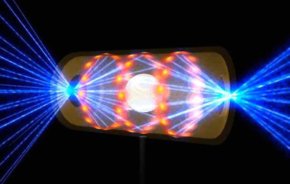 In Europe the main driver is HiPER (High Power laser Energy Research centre) which was aiming to demonstrate laser fusion by sometime between 2010 and 2012. The PETAL laser from the Aquitaine region in France is proposed to power the initiative.

PETAL (PETawatt Aquitaine Laser) generates laser energy in the infra-red and ultraviolet ends of the spectrum to combine in producing a 1021W/cm2 in femtosecond pulses stretched to nanoseconds.

HiPER involves institutions from many countries in Europe, including Russia, as well as the Asian countries of China, Japan and South Korea, and facilities in North America. Results are shared with the National Ignition Campaign in the USA.

There is also HAPL - the High Average Power Laser program. This is a collaboration of a number of laboratries, industry companies and universities in the US. Again Lawrence Livermore, Sandia and Los Alamos National Laboratories are represented along with the Naval Research Laboratory.

Although there appear to have been no reports of meetings since 2008, there had been considerable collaboration. Several lasers had been optioned. Various pellet designs explored.

The containment chamber was not required to house a vacuum, making design and materials more versatile. Again a number of beams were to be aimed to the central chamber area. The heat produced was to drive turbines.

With NIC and HiPER aiming to cooperate in their aims I wonder if this project has not been shelved.

Whatever the outcome developing fusion energy by laser fusion looks to be a significant research arm around the world. And effective results look to be not far away.