A nuclear reaction creates inordinate amounts of energy compared with conventional energy generation when considered on a weight for weight basis. 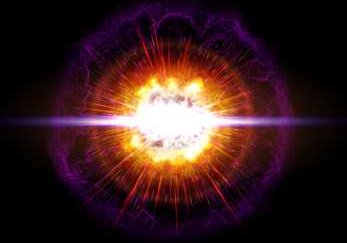 Much regular energy production is based on mechanical or chemical processes - relying on the weight of water or wind, or an oxidation or other chemical combination process.

Such processes occur with huge volumes of atoms or combinations between them.

The atom itself, the basis of all matter around us, though small, is incredibly powerful.

The Journey In Nuclear Understanding

Albert Einstein revealed this with his near universally known famous formula of E=mc2.

From Lord Ernest Rutherford, a famous New Zealander working in England, demonstrating the nature of the atom, to Neils Bohr from Denmark, speculating on the structure of the atom, to Italian Enrico Fermi, demonstating the production of new radioactive atoms by bombarding original ones with neutrons, along with many others, nuclear physics advanced. 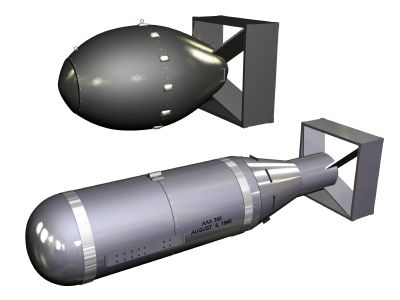 Fermi furthered his work by developing the first atomic pile reactor in Chicago as part of the World War II Manhattan project. Practically any atom could be converted to another by nuclear bombardment - an alchemist's dream.

And like the promise of alchemy this ability has opened the door to the virtually unlimited resources of the universe.

Yes, the a-bomb gave us pause for thought. And nuclear waste gives us grave concerns!

But that mass to energy formula gives us great insight into the abundance available to us. Small changes in weight of a nucleus give rise to masses of energy to harness.

Even a simple event like a nuclear decay of an atom decaying to another isotope gives rise to significant energy. And then decay to another element can also occur.

The majority of the internal heat of the earth comes from spontaneous nuclear decay of existing elements.

But beyond this causing nuclei to become unstable by say bombarding them with neutrons, producing smaller units, gives rise to huge power. 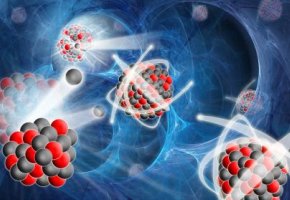 This readily occurs with the only naturally occurring fissile element u235 (uranium 235) - producing two smaller atoms such as krypton and barium after the interaction of one neutron giving rise to three more neutrons, which if they interact with other u235 nuclei will give rise to an exponentially cascading effect - the nuclear chain reaction.

At one known site on earth, Oklo in Gabon, in west central Africa, sixteen areas of ancient naturally-occurring nuclear fission have been found. It seems that groundwater initiated this, boiling away as the reaction continued, causing it to stop. Further exposure to groundwater caused more fission reactions. All this occurred around two billion years ago. The site was discovered through uranium mining in 1972.

And something like u238 (uranium 238 isotope) by alpha decay produces a thorium element and a helium nucleus of two protons and two neutrons. Uranium 238 can produce plutonium 239 - a further fissile product - by slow neutron bombardment followed by a couple of beta decays (see below). 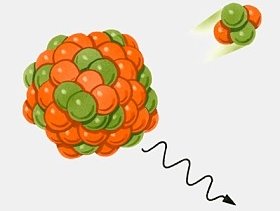 The generated energy can arise from minor changes in the central nucleus elements - which have small units of mass change. But the energy produced from mass change is huge!

Part of this reveals the proposed individual nature of each nucleus element - made of three quarks - up and down quarks, with charges that create a neutron or a proton. And the associated ability for changes in the quarks which can change protons and neutrons.

The mass of a proton is 1.6726 x 10-27kg, while that of a neutron is 1.6749 x 10-27kg. A minor difference, but with the energy-mass conversion formula, a nuclear reaction involving conversion of one neutron to a proton will result in quite huge amounts of energy production.

Or the incredibly strong nuclear binding force will be reduced in a larger atom breaking apart into two smaller ones - energy must be conserved - and so energy is created and can be used.

Other particles are produced in these reactions too, whether in the electromagnetic spectrum from gamma to x-rays, or light from effects on the electron orbits.

Neutrinos and anti-netrinos arise as massless particles ejected from some of these reactions in beta decay.

In this nuclear reaction neutrons are changing to protons, producing an electron and an electron antineutrino. The nucleus converts (alchemy) to the next higher element on the periodic table.

Or a proton converts to a neutron, ejecting a positron and an electron neutrino, the energy differential supplied by the lesser binding force required in the conversion to one step down the periodic table for the nucleus (further alchemy).

A nuclear reaction gives us an insight into the incredibly huge powers in the universe around us and a glimpse into what is available for our energy needs - alchemy of the purest sort!