Offshore wind for farming is the newest and latest upcoming trend in alternative energy production from wind. 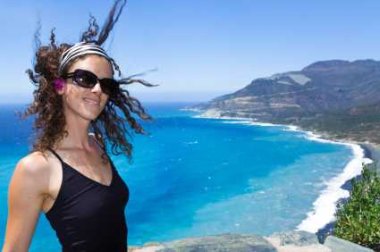 The warmth of the sun during the day heats up land structures much faster than the sea and large bodies of water. Water requires a lot more heat to raise its temperature an equivalent amount.

Warmer lighter air above the warmer land rises, drawing the cooler air in from the sea resulting in an onshore wind during the day.

At night, the reverse heat difference causes an offshore wind. 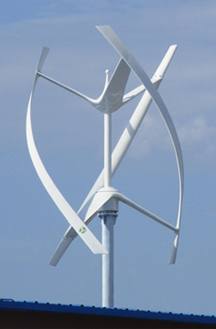 This predictable effect gives much more certainty of wind flows in offshore areas close enough to be influenced by the phenomenon.

With the changing directions of wind flows day and night wind turbines, to be maximally efficient, need to be able to harvest wind from both directions.

Wind turbines therefore need to be able to turn to face the direction of the breeze. Or they need to be designed to spin no matter which direction the wind blows from.

Vertical wind turbines will spin irrespective of the angle the wind blows from. Smaller turbines can be efficient with breezes down to around seven miles per hour (Under twelve km/hr)

These could be built for commercial applications. But care needs to be taken in regard to potential problems related to health issues arising from the larger turbines.

With the draw people feel for sea or large lake edge outlooks, population centres tend to concentrate around such areas. It might be more effective, with less potential health risks, if people were able to harvest on-shore and offshore wind with smaller residential wind turbines.

A huge new direction in wind harvesting has been with offshore farms for wind. These are not based so much on the effects of land and water influences on wind direction. Nevertheless they are still concerned with winds occurring off-shore.

The sea tends to be a level surface. There are swells, waves and ripples. But at the height the large commercial turbines are situated, these changes are relatively small. Wind turbulence effects are minimised at sea compared with land areas with their natural and man-made structures.

But the main benefit in situating these farms offshore is that the wind there is stronger and more consistent than on land.

Any new wind farming installation whether on sea or land is proposed only after a year or more of continuous wind speed and direction monitoring. General weather reports and history cannot be not relied on for siting them.

Another benefit in placing these turbine arrays offshore is that they  appear smaller in the vast water areas and any noise effect is minimised. Even bearing in mind sound does conduct further over water surfaces, generally there should be less chance populations would be affected directly by the sub-auditory effects large turbines create. Obviously there could be navigation concerns.

At present most offshore farms for wind are situated off the coasts of northern Europe. 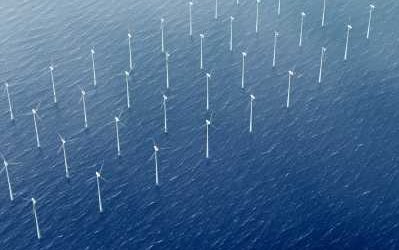 Until recently Denmark had the largest offshore wind farm - Horns Rev 2 - in the North Sea 30 kilometres off the west coast producing 209MW from 91 turbines. It was brought on-line in September 2009 (construction beginning in May 2008).

As it is so far from the coast it was decided it was more cost-effective to build a residential platform, Poseidon, with 24 rooms and associated facilities directly adjacent to the turbine area, for servicing and managing the farm.

In September 2010 Thanet, 11km off the coast of Kent in the UK became the largest offshore farm with 300MW capacity (enough to supply 240,000 homes). There is a sub-station on site which feeds a sea floor cable to a further land-based sub-station.

Currently the largest largest offshore wind farm in the world, also for the UK, is the London Array, officially opened by David Cameron in July 2013.  With 175 turbines producing 630MW it can power up to half a million British homes.

It has two offshore substations, one at each end of the turbine array.  Power from the turbines is received at these at 33kV.  This is boosted to 150kV to send it to the onshore substation minimising transition power losses.

Originally there was to have been a second phase to the London Array which would have boosted its production to 1000MW.  Studies on the first phases effects on the local ecology, particularly birdlife, had to be produced before this was permitted.

Shareholders in the company have decided not to pursue this option, preferring to concentrate their endeavours on new projects in other locations.

There is debate about how much actual power production will be available and the life of these turbines - felt by the builders to be forty years - some claim it is only 20 years.

Offshore wind farms are a new addition to alternative energy generation from wind. It looks like we will be seeing a lot more.