Solar power research is following many different trails. With examples in nature of extremely efficient light harvesting there are possibilities for producing enormous power outputs in even minimal solar illumination situations.

If we could fully understand and replicate certain organisms' abilities we could readily access an abundant power supply.

Our most efficient crystalline silicon photovoltaic panels strain to reach less than 20% electrical energy returns from the incident sunlight they are aligned to. Alignment is important too. Angled illumination causes their efficiency to fall markedly.

There are alternatives to this option that I have explored in the area of thin films and organic dyes. These technologies already operate much more efficiently that the crystalline silicon ones in low and diffused light situations. But even so their conversion rates are still very low.

For quite a number of years researchers have been exploring organisms that can operate in extremely low light situations. 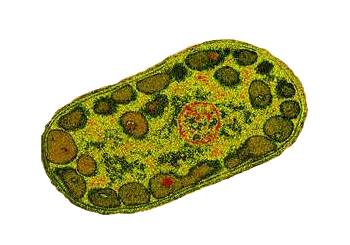 Green sulphur bacteria show around 98% efficiency in their sunlight harvesting ability - the most efficient collection we know of. Occurring in relatively deep water situations they receive very dilute, reduced sunlight. Some dwell at ocean depths of 100 metres.

There is even a genus in Mexico growing at 2,500 metres, where no effective sunlight reaches at all. These hardy bacteria utilize light from the glow of a thermal vent nearby.

By photosynthesis light drives metablism processes for the organisms. However, instead of using carbon dioxide and water, these bacteria utilize sulphides, hydrogen and ferrous ions to produce sulphur and other products.

In common with all photosynthetic organisms light is collected through specialized structures to channel its energy to the reaction centre where the chemical process occurs.

The green (as well as related brown) sulphur bacteria have rather unique light-gathering constructions. Their antennae are composed of light-gathering bodies called chlorosomes.

Almost entirely composed of bacterio-chlorophylls with some carotinoids, they are surrounded by a protein and lipid membrane. The antennae self-assemble into the structures. 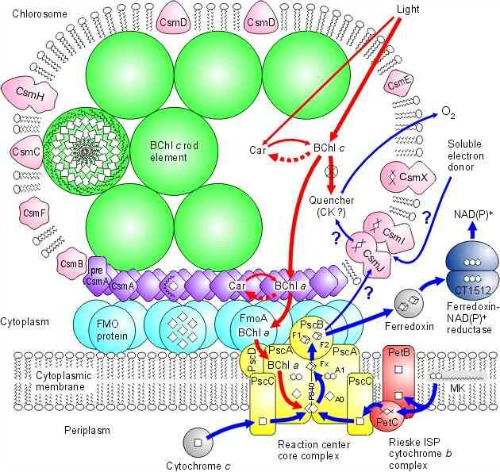 Diagram of light-harvesting complexes from University of Copenhagen

So far these appear to be almost laminated layers of bacterio-chlorohylls, without usual protein supports. The laminated alignment allows for very efficient passing down of energy generated from light stimulation of the bacterio-chlorphylls.

Continuing down to the base plate, usually with bacterio-chlorophyll-A supplying the base stimulation, the excitation energy passes through the protein-based Fenna-Matthews-Olson (FMO) complex to the reaction centre.

Related solar power research aims to learn how such an efficient structure works and also how we could reproduce the self assembly of the the elements.

Cross-disciplinary cooperation between groups will produce results in the shortest possibel time-frame. Often biologists and chemists along with materials scientists are collaborating with their varied skill sets.

One such collaboration is between chemist Alán Aspuru-Guzik from Harvard and materials scientist Alfredo Alexander-Katz from MIT.

Funded by and using the Massachusetts Green High-Performance Computing Center they are exploring the way the cholorphyll units of the antenna complexes self assemble.

Understanding this, could open the way for building light-harvesting units to build super-efficient solar photovoltaics.

From another angle, a multi-disciplinary and multi-national group published their ground-breaking solar power research related findings July 2012 in Nature Chemistry. 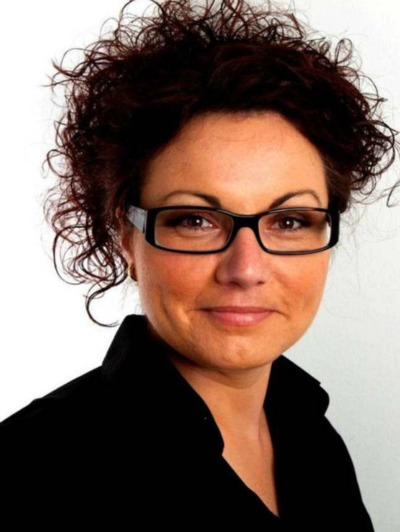 Dörthe M. Eisele from Humboldt University of Berlin has been working in a post-doctorate with researchers from MIT and others from the University of Groningen in the Netherlands to study an analogue of the green sulphur bacteria antenna complex.

Employing self-assembing double-walled nanotubes of cyanine dye 10nm in diameter and thousands of times in length they mimicked the structures. The nanotube layers responded to incident light.

By selectively disabling the individual walls through oxidative reactions they could demonstrate both walls were active in responding to the light, each to a different wavelength. The two walls responded together to achieve a greater result.

Although the investigators did not see this solar power research as a direct means of generating photovoltaic energy, they were intending to examine the idea of a self-assembling, light-harvesting complex.