Thorium Reactors Prevented By
Quirks of History, War and Personalities!

Thorium reactors mix with the demands of World War II, the Manhattan Project, the Nixon, Carter, Clinton and Bush administrations to produce a strange and wonderful history of twists and turns. Influences of design and personalities have steered us down paths which may not always have been ideal.

Yet there are possibilities out there and individuals who may still produce very positive outcomes. India is pursuing its own path.

After the discovery of the neutron in 1932, Enrico Fermi had conducted experiments in Rome bombarding uranium with neutrons.

His published conclusions led to further experimentation in Germany, which showed barium being produced in the reaction. Other scientists realised nuclear fission was occurring.

This was experimentally confirmed in early 1939 in Sweden and repeated in the USA the same month.

The Hungarian Leo Szilard along with Enrico Fermi, both now living in the USA along with Paris-based Frederic Joliot-Curie, realized the possibility of creating a chain reaction.

Fermi, on Szilard's recommendation, held back publishing the idea to prevent alerting the Nazi government.

But Joliot-Curie's French team published their results in Nature on work with uranium 235, showing significant neutron production. The possibility of developing an atomic bomb was out. 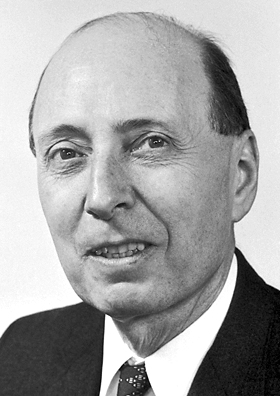 One of the influential thinkers in thorium reactors history, Eugene Wigner, Nobel laureate in physics for theoretical work on the atomic nucleus and elementary particles, introduced his closest European friend, Leo Szilard, to Albert Einstein in 1939. This resulted in the Einstein-Szilard letter to President Franklin D Roosevelt urging the United States to urgently undertake research on an atomic bomb.

Not surprisingly both Germany and Japan were working on developing a nuclear bomb during World War II.  Germany ceased its research before the end of the war to pursue work on the V1 and V2 rockets.

Considering available substrates to generate a nuclear fission reaction, three possibilities appeared. From experimentation, it was known 235U could produce the chain reaction, necessary for a fission bomb.

But 235U represents only about 1% of naturally occurring uranium.

Over time two other possibilities emerged. 233U would produce a similar effect and would have to be produced from thorium and its nearly completely naturally occurring isotope 232Th.

The other alternative was transmuting the most common uranium isotope, 238U by neutron bombardment into plutonium isotope 239Pu.

With the atomic pile reactor Enrico Fermi and his team developed in Chicago, limited amounts of 235U could be extracted.

There was only enough for the Little Boy bomb dropped on Hiroshima. But not enough of the isotope to conduct a test beforehand.

This was left to the extracted plutonium from the bombarded 238U. The Trinity test bomb and Fat Boy dropped on Nagasaki were made from 239Pu.

In the wake of the Second World War, with the subsequent cold war, developing nuclear weapons became of prime importance.

With the relative simplicity of breeding plutonium from the more abundant uranium 238, a number of choices were made. The initial light water nuclear reactors built for power generation gained favour in post war USA.

However alternative avenues were being explored.

Alvin Weinberg And Early US Work

The head of Oak Ridge National Laboratories (ORNL) from 1955, Alvin Weinberg, had been working in the Manhattan project like so many others who became involved in subsequent nuclear development. A protegee of Eugene Wigner, who also joined him at ORNL, he had been presenting the benefits of using thorium to the US government after the war.

At ORNL a couple of prototype alternative nuclear reactors were built using a molten salt approach. Although using uranium oxide, they believed its essential benefits would be best seen with thorium fuel.

Alvin Weinberg kept recommending the benefits of thorium reactors. But the USA had spent billions in its fast breeder reactors for plutonium. There were vested interests in the design of light water reactors as developed in the US. Eventually his insistence on thorium reactors resulted, with pressure exerted by the US Atomic Energy Commission, in the Nixon administration firing Alvin Weinberg from his position as head of Oak Ridge National Laboratories.

He was made director of research and development for the US Office of Energy Research and Development in Washington DC in 1974.

From 1975, until he retired in 1985, he established and was the first director of the Insitute for Energy Analysis at Oak Ridge Associated Universities. Even after his retirement he maintained an active interest in the Institute.

But knowledge of his development work in molten salt reactors died with those who were at Oak Ridge at the time. Interest in thorium reactors lapsed too.

There was some brief passing interest during the Carter administration.

Through the 1990s the Clinton Administration backed Thorium Power's technology. It was adapted to facilitate the destruction of Russian military plutonium in their version of the reactors.

Under the Bush administration this co-operation was terminated when Russia invaded Georgia.

India has been interested in developing thorium reactors, beginning from a plan presented by nuclear physicist Dr Homi Jehangir Bhabha in 1954.

With known reserves of thorium representing 30% of the world's total yet only 1-2% of the world's uranium, from a self-sufficiency standpoint, they have a strong incentive to pursue this avenue.

They adopted a step-wise program beginning with pressurised water reactors using processed uranium to produce a base of plutonium.

Their next step is in the establishment of fast breeder reactors with mixed plutonium and uranium 238 fuel. The first of these should be built by 2012 and fueled in 2013.

This will breed more plutonium which can then act as the seed for thorium reactors. The 239Pu will be the core for the 232Th which will form 233U which can act as further core fuel to convert more thorium.

Their current timeline would see their first thorium reactors coming on line around 2050.

To access the thorium reserves and the power benefit sooner they are considering some alternatives. Mainly they are looking at advanced heavy water, compact, high-temperature reactors. They might also consider molten salt reactors.

This is the form our next protagonist considers a best design idea. Using thorium as a solid fuel presents a few logistical problems.

In NASA he worked at the Marshall Space Flight Center from 2000 to 2010. He spent a year at Brown Engineering in Huntsville Alabama as chief nuclear technologist.

He left this job to found his private company Flibe Energy on April 6, 2011 in Huntsville, Alabama.

The thorium oxide is dissolved in a mix of lithium and beryllium fluoride salts. Heated to a temperature of 1000K these will establish a nuclear reaction using some 235U as the initiator. Once producing 233U, the reaction should be self sustaining.

Being liquid in its nature allows for the removal of products and adding of new fuel while it continues to operate. Heat from the reaction is conducted away by a surrounding further molten salt layer. This interacts within a closed unit of helium gas. The heated helium drives the turbines.

The central reaction operates at atmospheric pressure. The salts have a wide - 1000 degree - liquid range.

Due to this and the absence of water, which would need to vent as steam, a containment vessel is not required. 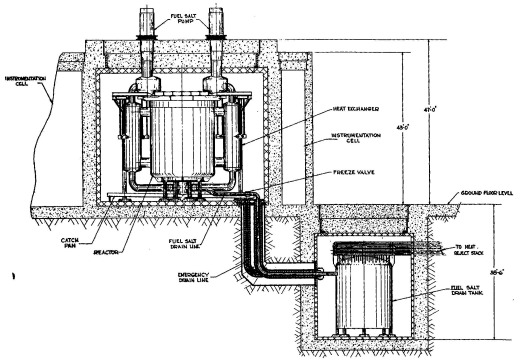 As a safety valve there is proposed to be a pipe leading from the reactor vessel. This contains molten salt which can be cooled at a point by blowing cool air over it. In the event of a power outage the solid plug would melt from the heat of the adjacent molten salt allowing the reactor material to drain into a further vessel with passive external cooling.

These thorium reactors would be scalable from quite small units to large power plants.

Initial customers are expected to be from the military. As smaller units would be transportable, they could be relocated to places as needed for operations.

With the more simple design of the reactors, build time would be shorter. The cost would be less.

Apart from cost, what are the advantages of thorium reactors?

One major benefit is the difficulty in producing fissile nuclear weapons fuel from it. The reactor produces 233U (which is fissile and could be used in weapons) but occurs along with 232U. 232U cannot be readily separated from the wanted 233U. 232U is dangerous to handle producing gamma radiation. It also makes it readily detectable.

Thorium is three times as abundant as uranium. Its useful isotope comprises practically all of the material that is extracted from the ground.

Little To No Processing Required

Uranium needs to be processed to be useful in reactors. The percentage of 235U needs to be increased. Normally hard pellets of the fuel are created, ground to ideal size, and then packed in tubes.

Molten salt thorium reactors do not require reprocessing of the oxide. It can be dissolved as is in the molten salt.

With the fuel able to be added while still running continued production is possible over decades. Most current uranium-based reactors need refuelling with new fuel rods every eighteen months or so.

A greater percentage of the thorium fuel will be used in the process. This in stark contrast to the high levels of waste uranium from current nuclear plants. This added to its much greater abundance makes it even longer lasting as a fuel in proposed thorium reactors.

The percentage of thorium that actually undergoes fission is the highest of any available fissionable materials. 92% (or 10 to 1) of the nuclear reactions result in fission producing safe lighter elements.

The major reaction is:

Thorium reactors could also produce small amounts of other materials, like 234U which is non-fissile, but would become 235U which is fissile.

There will be a few transmutations to heavier elements like 236U, 237Np and 238Pu which would eventually produce fissile 239Pu.

They could also produce small amounts of 231Pa from tiny amounts of the isotope 231Th. Unfortunately 231Pa has a radioactive half life of 32,700 years.

Thorium itself is radioactive producing alpha particles in its decay. These are stopped by the skin, but are dangerous if inhaled or ingested.

Current Use Of Thorium

Thorium has been used for many years, developed in the process of gas and kerosene lanterns where they form the stable element of the mantles that produce a clear white light, yellow if modified.

Thorium fluoride is also used as a useful refractive coating in lenses for cameras and other optical instruments.

Thorium reactors do look promising. If there was a wholesale conversion to them many of the industries currently providing fuel rods and other components to the world's existing reactors would be affected.

Their design would need to be evaluated. The test reactors developed by ORNL showed some signs of corrosion in the pipes. This would need assessment and monitoring.

US Energy Secretary Chu, when questioned on the possibility of future thorium reactors, was hesitant but suggested they could be considered. Obviously with that administrative caution of the need to evaluate and develop them over time.

It is likely, as with many tangential ideas in alternative energy, that private companies and individuals will need to lead the way in creating the initial versions and the subsequent market demand.