The tokamak fusion reactor has been the model chosen as a cooperative international effort to achieve workable nuclear fusion energy. The confidence of the vote is reflected in the billions invested in it. How has this come about? And what exactly is the tokamak design?

From initial research into nuclear fusion, a technological minnow arose to startle the world. Argentina announced they had achieved nuclear fusion in 1951 utilizing deuterium and lithium. Although the claims of the former German scientist were unable to be reproduced, it resulted in an acceleration of exploration.

In the United Kingdom a huge torus, the ZETA machine was produced. The USA followed a stellarator design that is examined further in this site. 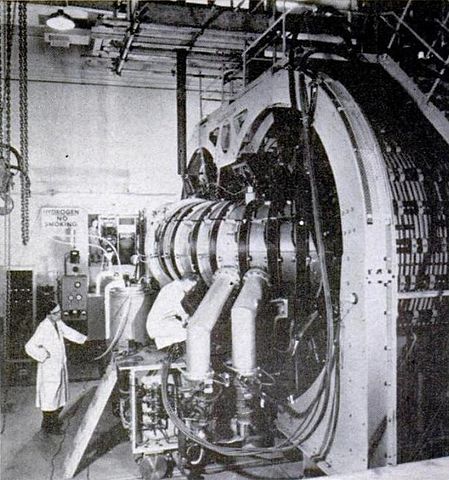 In 1956, at the height of the Cold War visits to the UKAEA ZETA site at Harwell by teams from both the USA and the USSR (which included Nikita Khrushchev) produced some unexpected results.

The USA saw how much further along the British team was than themselves in establishing fusion.

The top Russian scientist, Igor Kurchatov, presented a well-received lecture on research progress in the USSR, which had included the well-known Andrei Sakharov in its early years. An interesting point was raised by Igor Kurchatov in his lecture. He mentioned that he expected neutrons could be produced from fusion experiments without actual thermonuclear reactions to produce them.

Due to still-existing Cold War restrictions on information in fusion development UK scientists felt unable to question Kurchatov accurately without giving away important knowledge they had.

When the British team found neutrons produced from plasmas in their ZETA machine, they were convinced they had achieved workable fusion. Some time elapsed before final general release of their results. There it was realised thermonuclear fusion had not occurred. Temperature measurement of the plasmas was less than accurate due to instrumentation available at the time.

Around then international co-operation between the super-powers in nuclear fusion research results gathered pace and progressed to open collaboration after the United Nations' sponsored "Atoms for Peace" conference in Geneva, Switzerland in 1958. 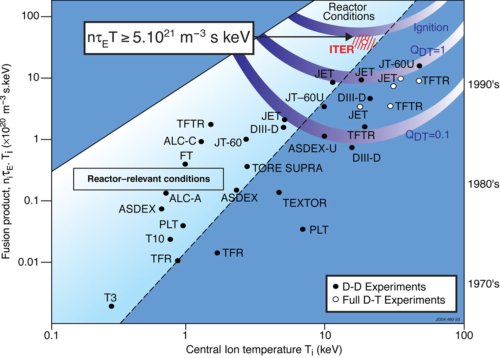 A major problem in attempting to confine plasmas to produce effective nuclear fusion results or even temperatures high enough to approach those required for fusion to occur, was how unstable and difficult to contain the plasmas were.

Yet confinement is a necessary requirement both to hold the superhot plasmas which would vaporize any known material physically attempting to contain it and to reach temperatures with related high ion movement which could produce fusion.

Conference To Change Everything

At a further international conference held in the USSR at Novosibirsk in 1968 the Soviets presented their high temperature results for their magnetic confinement design - the tokamak. Their more effective temperature measurements utilizing lasers were checked by scientists from other countries.

So compelling were results from this that most countries around the world embraced the tokamak as the magnetic confinement fusion design of choice for ongoing research. Even today this is the configuration for the majority of such confinement experiments.

How does the tokamak fusion reactor differ from other magnetic confinement types? 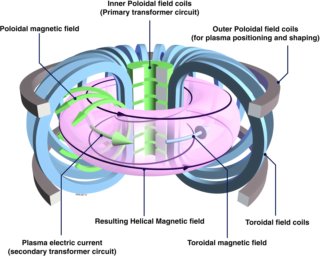 A tokamak produces a doughnut-shaped plasma. To do so it employs its strongest currents to produce the largest magnetic fields through its toroidal coils looped perpendicularly around the doughnut ring.

A current is induced in the plasma from high currents in the poloidal (or horizontal) coils in the middle of the doughnut shape producing its own magnetic field. The combined effect creates a helical magnetic field.

To induce the current in the plasma fields a changing current is required in the poloidal coils, therefore producing a more pulsed plasma response.

Further stability is added with much weaker currents (with their attendant magnetic fields) in horizontally-arranged (poloidal) coils externally around the circular doughnut.

Although the aim is to produce a cross-sectionally circular plasma, the physical chamber appears more "D"-shaped. This allows for the effective arrangement of the coils. It also allows for withdrawal of unwanted products in the lower portions of the "D". Within such a design it is possible to still be able to inject further substrates for the plasma and to improve heating.

With the density of the confined plasma being so low (several factors lower than atmospheric) to achieve high enough temperatures to achieve nuclear fusion, extra heating is required. This can be done in a number of ways from acclerators to radio-frequency, microwave and similar methods.

There is a large number of working tokamaks around the world from the USA, Britain, France, Russia, Japan, Canada, China, Iran, Brazil, India, the Czech Republic, South Korea, Switzerland, Portugal, Italy, Egypt even to Libya. Most of these are geared for research work with plasmas.

Some however are designed workable tokamak fusion reactors. The most notable of these is the joint European project, JET situated in the United Kingdom and the multibillion, multi-national ITER project being built in Cadarache, France.

To effectively attain the high currents to maintain the effective magnetic fields required in a tokamak fusion reactor, super-cooled wiring is required. This increases costs and the technical challenges to build and maintain such a unit.

In view of this some alternative ideas are being developed like a spherical version in the same research ground in the UK in which JET is housed.

For producing huge amounts of future energy in a continuous sustainable way, the tokamak fusion reactor appears a first choice certainly by the international monetary vote behind it. To be effective, though, such a facility appears to be hugely expensive, which might limit its deployment for worldwide energy generation.