Energy Plus House
Conservation And Generation

The energy plus house idea broaches the concept of our homes producing more energy than they consume. Not only houses, but also commercial buildings can run this way.

It goes beyond the passive house concept of greatly reducing a building's energy consumption, expecting even greater benefits to society.

It raises questions about power supply changing from centralized sources to a more web-like interlinked architecture. 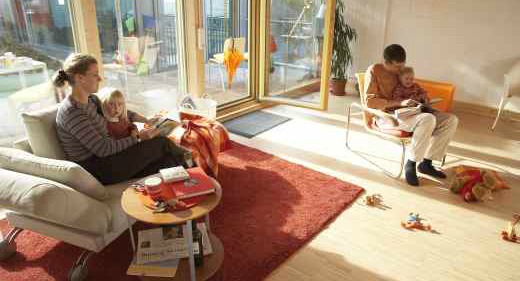 Considering that our homes consume around 40% of our energy supply, managing this more effectively would have a major effect on our future requirements and designs.

Up until recently I had not even considered it might be possible for a home I lived in to feed back more power to the grid than it consumed. 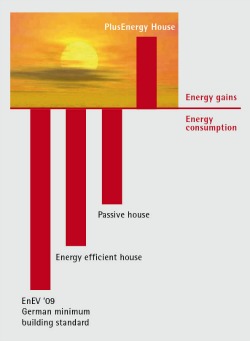 Yes I could imagine supplying power at peak home generation times from a solar panel array. But I still expected to be using grid resources for the night, low sunlight and high-demand times.

I have been struck watching programs on energy and alternative energy at the different attitude some German visitors have when travelling in the US and other countries.

They are amazed at the amount of building facade that goes unused for energy generation.

Also scanning buildings with infrared thermal imaging reveals how much heat we are radiating out to the air around us. We are heating the atmosphere with casual heat losses from poorly designed structures and ill-thought out construction ideas.

Other commentators have noted how freely we have had access to apparently unlimited energy supplies causing us to not even consider conservation let alone generating power from the buildings we live and work in.

It seems that Germany, along with other countries in Scandinavia and central Europe, have been thinking about and practising ways to conserve energy for many years. That along with promoting alternative energy generation.

It should come as no surprise that the biggest proponent and most well-known voice in the energy plus house idea is a German. With his plusenergy design ideas he is shaking up our possibilities for the future. Not just in a conceptual way. But in already created buildings. His background usefully illustrates how cross-fertilization over a number of disciplines can produce even more innovative concepts. 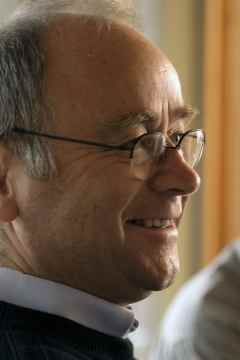 Born in Freiburg in 1944, architect Rolf Disch intially trained as a cabinet maker. From there he explored masonry construction.

Spending some time in structural engineering, he then studied architecture from 1963 to 1967. His solar architecture business was founded in 1969.

During the 1970s he actively campaigned against the construction of a nuclear power plant in nearby Wyhl - which should strike some sympathies with nuclear-free New Zealanders.

In the mid 1980s he designed solar powered cars for challenges in Europe.

He participated in the solar powered vehicle race across Australia in 1987.

For many years he designed homes, communities and retirement centres built around the concept of utilizing solar energy. Both photovoltaic panels and solar water heating units were incorporated along with passive solar gain.

South-facing orientation (for the northern hemisphere location), good thermal mass materials and overhangs and eaves to limit summer sun irradiation were all essential design ingredients. A number of these designs have won architecture awards.

He even worked with another company, WeberHaus, to develop a modular, prefabricated home based on the concept - the Övolution®.

After years of design work he established the Plusenergiehaus® concept for the energy plus house idea. Technically and economically all the elements had come together. 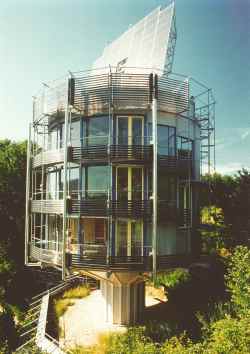 Little wonder then that he constructed his prototype energy plus house for himself.

Interestingly he did not focus on solar gain and power alone. For someone passionate about our future and the planet that would not be unexpected.

His varied prior training no doubt helped in this perspective.

His ground-breaking cylindrical, rotating Heliotrope was completed in 1994.

With a glazed side to allow passive solar absorption in winter and other cooler times and an insulated side to deflect heat in hotter months he can chose his orientation to the sun.

The large roof array of photovoltaic solar panels can be independently rotated to receive maximum sun exposure. Its angle can be adjusted to maximize solar gain and to avoid excessive stresses in high winds. 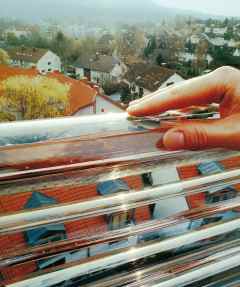 The floors have heating supplied by earth to air heat exchangers.

Extra internal building heating can be generated when needed through a wood pellet burner.

In fact three different heating systems were tested in the Heliotrope.

Rainwater is collected and filtered.

Waste from garbage and sewage is processed on site. Solids are managed by odorless dry composting.

Liquid wastes cascade over a vegetated pond in front of the building to clarify them. This is one self-contained living marvel.

Rolf Disch has designed a couple of other buildings along the same lines. One is a more commercial-oriented solar tower and showroom for the tap and bathroom fixture company, Hansgrohe, in Offenburg. The other is a former mobile example converted into a dental laboratory.

His plans for a hotel, built on the concept yet rotating more than the other structures to allow guests varied exterior views, has yet to be constructed.

He is keen to design and supply similar designs to those interested in the idea.

Constructed of wood in his home town of Freiburg, he established a car-free, family safe residential environment.

The Schlierberg Solar Settlement was completed in 2004.

Close to public transport, abutting a major thoroughfare, its layout has allowed for the feeling of almost country living.

The demand for such an energy plus house is very high. With their relaxing, well-sited environment they are also extremely comfortable for daily living.

Every house receives money each year for the excess power it generates and feeds back to the grid.

As part of the concept, the commercial building called the Sun Ship - the Sonnenschiff - was finished in 2006. 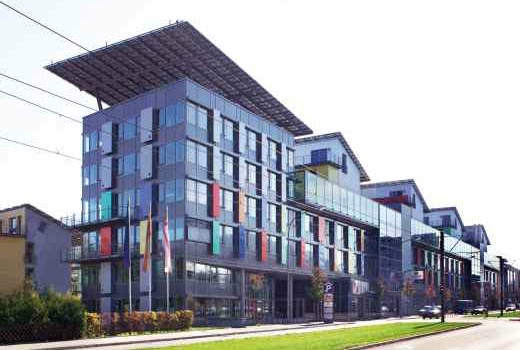 Arranged as a linear construct along the road, mainly three storeys high and five storeys at one end, it acts as a sound buffer from the adjacent major road for the solar community houses.

Substantial car-parking is incorporated in the basement.

The main structure is based on reinforced concrete. But the facade is of wooden construction, fitted together to eliminate thermal bridges. The facade acts as a passive heat collecting area.

Special plaster boards in the walls of the structures incorporate tiny paraffin balls which liquify around 25 degrees C, keeping the internal temperature close to this level as more passive heat is absorbed.

As the atmosphere cools the retained heat in the liquified paraffin is released again to stabilize the temperature.

Triple glazing is standard for all these constructions. 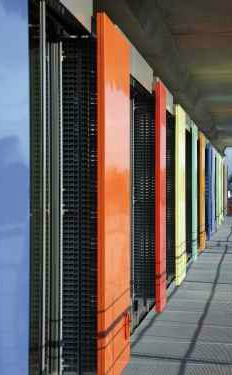 Between the glazing Rolf Disch's team has designed clever panels with grills in the sides that allow for natural air circulation from the outside.

Special baffles control sound. In spite of the building being on a major road, internal sound is very quiet, even with the external ventillation panels open.

Careful sound laboratory testing of these panels before they were ever utilized ensured just the right amount of materials was used.

All aspects of these energy plus house and commercial building designs show this rigorous laboratory testing and computer modelling. Nothing is left to chance.

The Sun Ship commercial building houses a number of businesses including retail, servicing the solar settlement and a surrounding population of 25,000. Yet it is another energy positive construct, generating more power that it consumes.

A standard fitting of the Rolf Disch energy plus house and buildings is the vacuum insulation panel. Constructed of foil faces with a central porous core from which air is evacuated. The edges are wrapped in further sealing foils to maintain the vacuum.

Vacuum insulation panels cannot be cut as this will destroy the insulating vacuum. Specially shaped panels need to be made for non-standard angles. 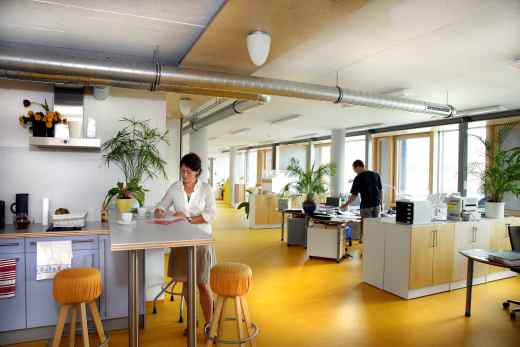 Rolf Disch's Plusenergiehaus® concept has introduced a massive leap forward in building design and philosophy for the years ahead.

Any home could be designed to employ the effective passive house energy standards and then lifted to an energy plus house by incorporating extra alternative energy generating methods.

These have the advantage of high R-values (not as high as a vacuum insulation panel) for a thin product that can be cut to size and molded around awkward shape. Multiplication of insulation can be achieved by adding extra layers of the thin product.

Newer technologies of hybrid solar panels are now becoming available. Requiring less space to produce an equivalent amount of power, even more energy could be generated.

As well as solar photovoltaics and solar water heating other alternative energy-generating modalities can be used.

In his Heliotrope Rolf Disch used floor heat exchangers. Variations on this can be used with geothermal type ground source heatpumps.

His ideas for handling waste allow for the possibility of very independent living. Not to mention communities that generate very little or no waste for council removal.

The energy plus house idea could lead to a real revolution in community requirements and administration.

The more residences and other buildings that incorporate the energy plus house idea, the lower becomes our overall reliance on the electric power grid. The more we can approach a net or web-like resiliant, almost organic structure, immune to sabotage and huge blackouts.

Construction materials for an energy plus house could be from low carbon concrete as produced with waste process fly ash or slag ash. Lighter-coloured, stronger and smoother-surfaced concrete from this source is an ideal heat sink material for increased passive solar gain.

The possibilities become endless with a new way of looking at our homes.