General Fusion From Canada
For A Cheaper, Synthetic Approach

General Fusion, an alternative take on driving nuclear fusion and validated by external agencies, is promising greater output power than that put in within the next two or three years. Using methods previously explored over thirty years ago it has attracted backing from the Canadian government, other venture capital and most recently from Jeff Bezos of Amazon.com.

General Fusion Canada combines the two main ideas and strands that have been used to produce alternative energy by nuclear fusion - magnetic confinement and inertial confinement . It is known as magnetized target fusion. 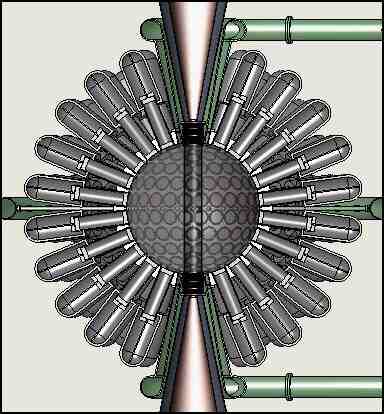 Compression is by an acoustic mechanical means first explored by the US Naval Research Laboratories, Washington DC, in the late 1970s. At that time technology was not at the level required for this approach to achieve ignition. The steam driven pistons and control mechanisms could not respond rapidly enough to match the short active plasma life.

The fuel is confined in a magnetic manner and then compressed to achieve thermonuclear conditions. There is not the requirement for extended containment as occurs in standard magnetic confinement.

The compression rate is slower than that achieved by lasers in inertial confinement fusion (but also much less expensive to produce). It nevertheless does cause enough rise in both the pressure and the temperature of the fuel to allow fusion to occur.

Proposed by Dr Michel Laberge, when it was reviewed by Ronald C. Kirkpatrick, a retired visiting scientist from Los Alamos National Laboratory, he assessed it as "the closest to a potential reactor scheme". Boeing engineers have evaluated the compression system and reported it as feasible.

The idea is to have a spinning central core of lithium and lead alloy in a 2 metre diameter spherical chamber into which will be injected from each end tritium and deuterium. This is pre-heated to a million degrees by energy released from a capacitor bank at each end of the chamber. A plasma is formed that will create its own toroid as occurs in other work in free plasmas.

As the two plasmas converge already-fired, steam-driven pistons surrounding the central chamber compress the molten lead and lithium onto the central plasma area. This produces its own acoustic shock wave compressing the plasma at the crucial mingling time causing extra heating and subsequent fusion.

The products of the deuterium and tritium fusion are helium (which can be harmlessly released into the atmsophere), neutrons and extra heat. The neutrons interact with the lithium to produce more tritium. The lead-lithium mix aims to mop up all the produced neutrons in the meter radius to the wall which eliminates problems of neutron-versus-wall interactions which can cause wall weakening and further radioactive by-products. 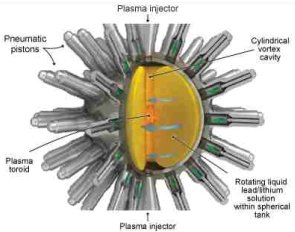 To create the vortex in the lead-lithium alloy the material will be injected at the equator of the sphere and removed at the poles. As the heated mix is emptied the components are separated to allow reservation of the tritium for further fuel.

The heated lead will be utilised to produce steam. A third to a half of the steam will be used to drive further piston actions. The rest will drive turbines to produce electricity.

Each pulse is expected to produce 100MegaJoules of energy. With one cycle firing each second 100MegaWatts of output should be achieved.

To do this the plant would require 18kg of deuterium and 60kg of lithium a year. The estimated cost to build one such complete power unit has been evaluated at $8million Canadian.

Los Alamos Laboratories in New Mexico have been working on magnetised target fusion too. But their compression system is by an aluminium tube collapsed under an electrical charge released from banks of capacitors. In the process the tube and wiring is destroyed and needs to be replaced for the next pulse.

General Fusion is based in Vancouver, British Columbia, Canada. It is aiming to produce a net gain in energy through fusion within four years. 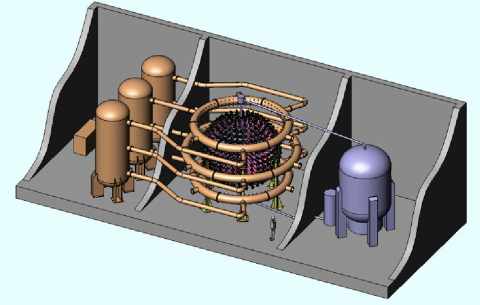 In 2009 the company received an award for excellence in the field of environmental technology research at the Clean Equity conference in Monaco.

It is backed by grants from an energy development fund created by the Canadian government, Canadian venture capital and other major investors.

In August 2009 General Fusion secured initial funding of $13.75 million after showing proof of the concept with a scaled down version and testing of essential materials.

More recent funding in May 2011 reached US$19.5 million. This round included investments from Jeff Bezos of Amazon through his Bezos Expeditions and the Business Development Bank of Canada.

General Fusion staff for management includes Dr Michel Laberge and Doug Richardson. The president, Dr Michel Laberge, has a PhD in Physics from the University of British Columbia from 1990, with two further post-doctoral studies in Paris and Ottawa, Canada. He had spent nine years in Creo Products, an imaging company later taken over by Eastman Kodak Company.

General Fusion has attracted considerable finance for a project that promises significant nuclear fusion energy from a relatively cheap power unit in a short lead time. It will be interesting to see its progress in the next few years.