Inertial confinement fusion is one of the two main ways we have been using to achieve fusion. It is the logical result of the original man-made fusion reaction - the H-bomb. 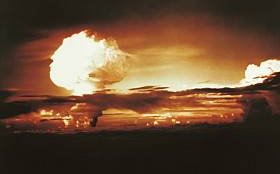 This was created by making a target of fusionable material and igniting a reaction about it with a fission bomb to compress the core material. High pressures and high temperatures created over a very short time caused fusion to occur. The result - a sudden, profound release of energy.

Therefore it is no surprise that initiatives pursuing this technique are led by companies involved in H-bomb research and production. A logical extension of already effective research. Plus it provides additional data on this type of process now that nuclear weapons production has been halted.

The other main method being researched for fusion is magnetic confinement. In this version plasma usually is confined over a relatively long time with mainly electromagnetic means as it is heated until fusion occurs. The pressure for this is usually below atmospheric compensated by a high temperature such as in the multinational French ITER project.

Inertial confinement fusion combines huge pressures and high temperatures over a split second to achieve a pulse of energy. To result in power production a continuous sequence of pulses needs to be produced - similar to an internal combustion engine.

To create the huge compression various methods have been both used and proposed. Aiming an array of lasers, ion beams, or similar can create an inertial confinement effect.

At the centre focus of the beams is the fuel pellet. This needs to be in the correct configuration with an even surface to ensure the aiming energy beams create external heating at exactly the same time.

Also to create maximum compression the beams need to be of equal energy and arrive synchronously. 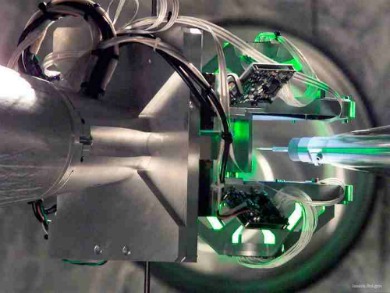 The compression effect can be direct or more indirect such as the Lawrence Livermore National Laboratories' project where the gold hohlraum containing the fuel pellet produces internal cavity x-rays when irradiated with infra-red lasers. The x-rays, effectively produced in the smooth mirror-like cavity, multiply to create huge energies which compress the seed of deuterium and tritium.

The Sandia National Laboratories  Z-pinch project uses tungsten wires vaporizing suddenly producing a reflective metal plasma that will internally reflect created x-rays to compress a core fuel pellet. Successful firings of the array have been achieved, without the pellet.

Lawrence Livermore Laboratory has proposed a hybrid fusion-fission reaction where an inertial confinement reaction produces energy inside a fission fuel shell which allows further energy production from a fission reaction. This will create a way to utilize spent radioactive waste from fission reactors by using the neutrons produced from the inner fusion reaction.

The 1970s were a time of great hope for inertial confinement fusion. It looked as if fusion could be achieved in no time. But laser power and pellet design were not adequate.

In 2014 Lawrence Livermore's lasers produced more fusion energy from a fuel seed pellet than was in all the laser beams.  Some news items gave the impression that the whole unit had produced more energy than it consumed.  However the power required to drive the lasers was still much greater than the fusion energy generated.  There is a way to go yet.