Hempcrete Construction
Ticks So Many Boxes!

Hempcrete for building homes and other structures first came to my attention watching the excellent Grand Designs television series.  In a special edition its presenter, Kevin McCloud, decided to build a community housing project supplying multiple residences at a very low cost per unit - under $250,000.

He mentioned using the material as part of the build. Although I was intrigued by the idea it took me some time to check out more about it.

Once I did though I became increasing impressed with the possibilities of this superb product.

It could provide insulation, thermal mass for temperature regulation, acoustic insulation and excellent control of humidity, flattening out peaks and troughs.

It was very easy to work with.  It was light-weight.  It would last centuries.

Its rapid,easy growth absorbed massive quantities of carbon dioxide before its use. Once incorporated in a build it continued to absorb carbon dioxide from the atmosphere.

In growing the plants, which had many other uses, it conditioned the soil, eliminated weeds, and prepared it for crops later in the year.

Having been incorporated into a building, if it was torn down, the product could be recycled into further hemp wall constuction.  Why would you not use this product?  And where has it been all these years? 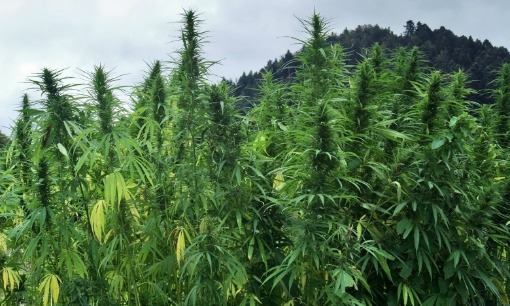 There is some dispute about a sixth century bridge being found in France constructed from hempcrete.

In the last two or three decades it has been utilized in restoring old wattle and daub, cob and similar older construction material buildings.  Such residences have stood for centuries clearly demonstrating the stability of the lime-based solid building style.

In recoating the old walls with new renders and plasters initial use of our widely available cement bases caused problems.

Cement produces a inflexible, non-breathing coating.  It resulted in cracking of the surface and rotting of the timber beams that had previously lasted centuries.

Beginning in France, hemp and lime mixes were trialed.  This mix bound well to the old walls, did not crack and allowed the materials to breathe.

An example of this being used in England was presented at the 2012 Grand Designs Live exhibition in England.  A video of this no longer is available.  But there is another showing repair of a sixteenth century Irish villa.

From these encouraging results people in France began constructing new builds from the same material.  Its many beneficial qualities became more and more evident.

Hempcrete is made from the woody material - the hurd or shiv - of the central stem of the industrial hemp plant.

Effectively a waste product in the growing of industrial hemp for fibres and seeds for nutritional oil, the core has been used mainly as a high quality horse bedding.

Broken into uniform pieces, the hurd can be added to a lime binder in much the same way aggregate and cement are combined to create concrete.

The proportions of the hurd or shiv to the lime binder are varied to create the best material for walls, ceiling areas and floors.

The wall composition mix is not designed for load-bearing.  The frame of the building, normally wood, provides the compressive strength.

A wooden frame can be located inside the wall.  Or it can become part of the internal structure of the hempcrete.  With the alkaline nature of the the lime mix, steel would not survive as well coated in the mix.

The lime alkalinity provides good pest control.  This, along with the moisture vapor-permeability of the material, does not support mold growth.

Although water vapor can penetrate, water does not.

The mixtures cures slowly as the water in the original mixture evaporates.  It is important for the construction area to be protected from driving rain during this time.  This can take about month.  The thicker the wall, the longer the drying time.

In spite of the long curing time shuttering, or formwork, to support the wall in the building process can be removed within hours after it is laid.

Some aggregate methods have proposed a portion of cement as part of the lime binder in order to achieve a more rapid cure and strength.  With the known problems associated with cement and lime-binder materials this does not seem like an ideal recipe.  Maintaining the breathe-ability of the structure ensures its long term health.

Over time, lime combines with air carbon dioxide forming calcium carbonate, the chalky substance the lime was made from.  This sequestration enhances the earth-enhancing gaian qualities of such builds.

Also important is that producing lime for the lime binders is much less energy intensive than the process for producing cement.  It is a more earth-friendly approach.

The thermal insulating properties of hempcrete are noted in the table below provided from information from Hemp Technologies.

These values will vary depending on the density the hempcrete is tamped to during construction.  Generally the central part is very lightly compressed with the edges somewhat more strongly compressed.  Machine-blown hempcrete would be more consistent in density.

Interestingly people who have been involved in constructing a hemp house or a commercial building have noticed an even greater feeling of comfort inside the building than would be expected from quoted insulation U-values. This appears to be due to the water permeability properties of hempcrete.

As the humidity rises, it absorbs more water vapour.  As it falls, moisture is released back into the air.  More stable humidity levels give the impression of greater temperature stability.

Hempcrete can be poured and tamped into formwork for the walls or ceilings.  Or it can be sprayed.  Either way it produces a very air-tight structure.

Surfaces can be finished with lime renders incorporating finer hemp particles. Lime washes and finishes, rather than paints allow for continued breathing of the structure.

Values of air changes per hour are a lot lower than those for standard builds.  Yet they are still greater than those allowed by Passivhaus standards.  But incorporation of specialised sealing tapes about windows, walls and services would readily allow a hempcrete home to be built to meet passive house requirements.

As the hemp and lime composite can be used in floors, walls and ceilings it is possible to achieve a structure without thermal bridging - so important in meeting stringent passive requirements.

With the solid wall construction of a hemp house, building trades involved can be simplified in comparison to repeated visits necessary in layered conventional builds.

Historically industrial hemp provided fibrous materials for ropes, clothing and canvas both for sails and artwork.  Its very long fibres resulted in it being replaced for clothing materials by cotton and similar plants with shorter length fibres which were easier to weave.

During World War II flagging cultivation of the plant was stimulated by demands for war time supplies.  Post war demand fell away.  Concerns about its direct cousin, marijuana, resulted in legislation banning its growth.

Cultivation continued in Europe.  Consequently its resurgence began in Europe.

France has lead in building with it. But Switzerland and England have followed closely in recent years.

Construction of such houses in the US has required the importation of the hurd or shiv base.  Much of this comes from China.

Canada, which allows cultivation, is looking to become an important North American source.

Even in New Zealand an expatriate returned from hemp building work in the USA to investigate growing the plant in New Zealand to supply export material back to the States.

Industrial hemp grows rapidly.  From seed, it gets up to four metres in height within around fourteen weeks.

With its rapid growth it does not require pesticides.  At the same time it suppresses weed growth.  Its longer taproot draws nutrients up from deeper in the soil, facilitating the growth of subsequent crops.

Rapid growth and production of male and female flower heads is incompatible with associated growing of recreational and medicinal hemp crops.

Building using hempcrete is rapidly growing in popularity.  Companies in the USA, Canada, England, Australia and elsewhere are leading the adoption of this really eco-friendly recyclable building technology.

Still in its infancy much is being learned along the way.  For those wanting more information this useful link gives access to a series of YouTube clips from many countries and languages.