Solar power alternative energy producing electricity day and night, 365 days a year without building a special storage system is a reality.  Not only does the technology exist, it has been tried in the past with good results.

A purely privately funded company is behind the current initiative.  Plans are under way for a test unit in Hawaii.  Larger generating units are planned both for Hawaii and the Caribbean. 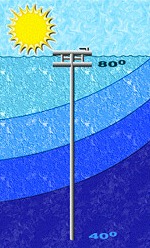 With the sun pouring constant energy onto the earth - including the seas which cover over 70% of the surface - power is there for the harvesting.

Warm water, being lighter, tends to remain on the surface layer.  By using this stored energy, electricity can be produced.  In this case by using the difference between the warmer and cooler water in the ocean.

With its high specific heat capacity, slight temperature variations in water represent a significant amount of energy.  It is a naturally occurring storage battery of solar power.

Back in the late 1800s Jules Verne theorised about generating electricity from heat in the sea to power the submarine of Captain Nemo in his book 20,000 Leagues Under The Sea(s).

Soon after scientists around the world were working on the idea.  But it was not until 1930, in Cuba, that the first Ocean Thermal Energy Conversion (OTEC) plant was built, producing a 22 kW output.

A highly skilled innovative father and son team developed technology to harvest the sun's energy from the ocean over a number of years.

J Hilbert Anderson, a refrigeration engineer with many patents to his name, and his son, James H Anderson Jr, worked together to create a viable solar power alternative energy device utilizing this heat in the ocean surface.

James completed a bachelor's thesis on the idea in the early 1960s.  From there the pair continued to refine and develop the technology.

In the 1970s the predecessor to the US DOE, the Energy and Research Development Administration (ERDA), ploughed a couple of hundred million dollars into exploring the viability of generating solar power alternative energy this way.

By the 1980s they declared it a technologically and commercially viable alternative.

A couple of demonstration OTEC plants were built, one in Hawaii and another in Japan.  Changes in oil prices from the initial oil shock made it less commercially attractive and work stalled.

Meanwhile the Andersons continued their exploration with their company Sea Solar Power.

They found aluminium would work as effectively as more expensive alloys.  Fouling of the heat exchanging parts could be avoided with small concentrations of chlorine.

In 2000 the Abell Foundation, established around the mid twentieth century for philanthropic work in the Baltimore, Maryland area and later in developing technology (including nuclear fusion by Lawrenceville Plasma Physics' deep focus fusion), bought the rights to the Andersons' Sea Solar Power.

Forming OTEC International (OTI) they continued development of the work with a strong team.

This solar power alternative energy is still based on the differences in ocean surface temperatures from that in the deep waters.

By drawing the warm water in and exchanging its heat with a specially selected low boiling point liquid, ammonia or propylene, a turbine can be driven to produce electricity. Ammonia (or propylene) is cooled to liquid again with the cool water drawn from deep in the ocean.

Effective surface temperature levels are felt to be available about the equator to as far as latitude 20 degrees north and south.  With established ocean current circulations warm water will be accessible from further latitudes too. 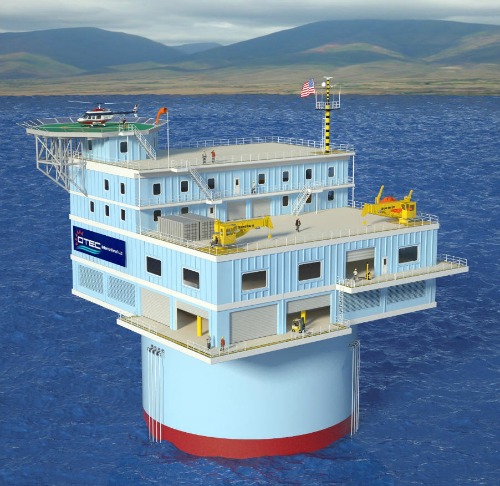 At present a land-based trial unit is to be built in the big island of Hawaii before the installation for a 100MW plant off the shore of O'ahu in the future.

A 25MW one is also being negotiated for the Caribbean.

The developers note that all of Hawaii's power could be derived this way.  Not only that, but the energy contained in the ocean surface in the proposed region - which supports a lion's share of the world's population - could supply 500 times the world's current energy needs!

Who says there is not enough energy to go around?  Or that we are approaching limits?  Our nurturing sun is giving us as part of the gaian interconnection all we could need to continue on without polluting our backyard.

The huge oil rig sized platforms that will produce this prodigious amount of energy will be anchored in deep water off-shore.  The units have been approved in principle by American Bureau of Shipping. 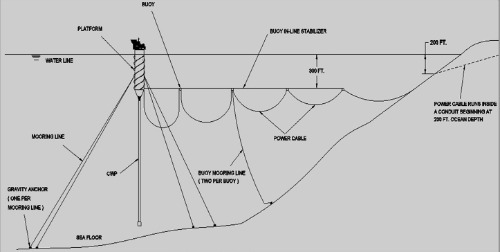 Transmission of the power back to land has been designed.  There are the extra challenges and costs involved in doing so as with off shore wind turbine power production.

With OTI's fully private funding stream (owning the patents behind the system) and no subsidies involved this long awaited disarmingly simple solar power alternative energy harvesting device will compete in a very obvious way with all comers out there.