A solar thermal power plant has the ability to generate power 24/7.  Capturing the super-abundant supply of solar energy to convert for our burgeoning energy needs could supply much of the world's needs for years to come.

Huge political, scientific and economic clout is backing the concept through the ideas of the Desertec Foundation.

As a charitable foundation it drives the idea for worldwide adoption to the initiation of commercial ventures. 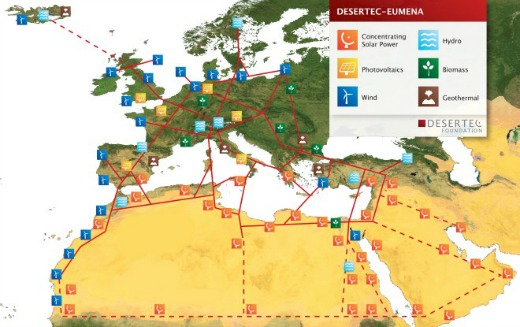 Their stated purpose is to include all forms of renewable energy.  The main thrust has been in pursuing the solar thermal power plant design idea.

For some time this had been designed for panel parabolic mirrors heating fluids in a central collecting tube that feeds the holding tanks.  From these heated fluid stores energy is drawn off as needed to drive turbines to produce electricity.

Newer ideas include fresnel mirrors which would be easier to create and clean as I have explored elsewhere.

Until recently the idea hab been to utilize the curved mirrors. Robots would keep the mirror surfaces clean to maximize energy gathering. 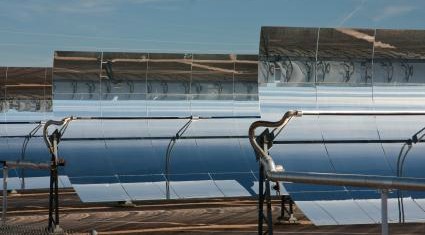 The favoured site for the mirror arrays has been desert situations.

With the concept of deserts being unused areas of the world's surface that would not detract from crop and other uses this seems ideal.

Also that so many of the world's population (around 90% in Desertec's studies) living within 3,000km of deserts in the Arabian peninsula, sub-Saharan Africa, India, eastern Asia, Australia and southern Africa.

Given Desertec's calculation that each person requires 20 square metres of collecting mirrors for their total energy needs that would mean 140,000 square kilometres (54,000 sq miles) of desert (equivalent to the area of England or New York state) would be covered to create this power.

With the assumption that the desert is a dead area it would seem to be totally practical and sensible to use such wasted space in power generation for a needy humanity.

But deserts are hardly dead areas.  There is much life present.  Deserts are part of the complex organism or cell that is that beautiful jewel earth - that gaian interconnected complexity.

True we have created more deserts in modern times with our agricultural practices and lack of concern for this delicate balance.  But we should proceed with due caution in colonizing desert areas with our energy gathering arrays.

It is not just the collecting systems, storage tanks for the heated fluids and turbine generators - it is also the distribution of the generated power.

Example of a Solar Thermal Power Plant from Nur Energy and supported by the Desertec Foundation, scheduled to supply power from 2016 based on sunlight concentrated on a collecting tower in southern Tunisia.

As described in the issues related to transmission lines, power from these huge generating stations would be fed to power girds by high voltage direct current (HVDC) lines.  This produces the most efficient distribution over large distances with less power loss and infrastructure than alternating current lines.

Direct current is also essential for under-sea transmission which will be needed in feeding North African power to Europe, the home of many involved in these designs.

Countries in the arid coastal regions will be able to utilize generated power to desalinate water for their populations.

The intention is also to also feed back power such as that generated from wind in Europe to the solar thermal power plant site countries such as in North Africa. 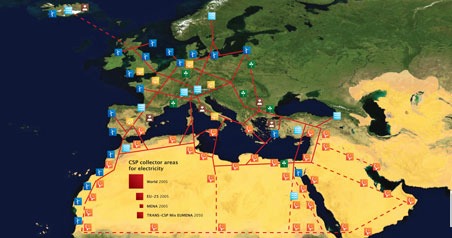 Already Saudi Arabia is setting up a commercial company to employ these design principals, as an element in its desire to have its own renewable energy supply.

But this is something greater.  It raises the questions of "what ifs". Including sudden outages that could plunge huge densely populated areas into chaos.

Interestingly the Club of Rome is behind much of the Desertec solar thermal power plant idea.

Established in 1968 as a think tank of up to 100 members from many countries and backgrounds to analyze long term future trends for our world, it burst into widespread public consciousness with its MIT commissioned report "The Limits To Growth" in 1972.

The conception of a soon-to-be-exhausted oil supply and similar issues arose from this study.  Obviously a number of its predictions have proved rather wide of the mark over the intervening years due to a number of factors.

But their basic thesis is still that the world's population is consuming far more than the earth can sustain and we will run short at some stage.

It is one type of response to our urgent need for clean alternative energy.  Time will reveal how wise, practical and workable this will really prove to be.