Three Mile Island gave the world its first glimpse of the possibility and danger of a nuclear meltdown. The China Syndrome film explored it, actually being released less than two weeks before the incident occurred - beginning on March 28 1979. 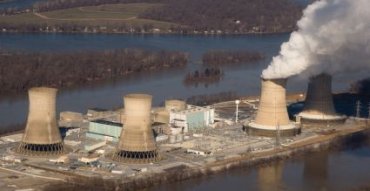 The reality of nuclear fission reactors is that we are controlling a runaway nuclear reaction. As long as the control is carefully maintained there is no problem. But if there is an error.....

The nuclear core gets so hot it melts through the floor and continues reacting melting the material below that and so on and hence "heads for China".

A Sequence Of Errors

Like other accidents, in the USSR and more recently Japan, the 3 Mile Island one was due to an accumulation of factors. 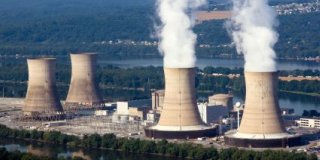 The main problem that lead to compounding effects had occurred in another facility of the same company in the past. But it had been recognised by workers when it occurred and responded to in an appropriate time leading to speedy control.

The workers at 3 Mile Island had their attention focused elsewhere and missed key signals.

The initial problem was a related to failure in pumps that cooled water from the turbines and those that fed the cooled water back towards the reactor to be heated. The turbines were shut down. And the control rods, limiting further nuclear reaction, were lowered.

Other auxillary pumps had been closed for maintenance. Under guidelines they should not have been while the plant was active.

As the turbine side of the cooling system was not removing heat from the core and its pressurised cooling system, heat continued to rise. The core cooling water had boron in it to control and limit the neutron release from the nuclear reaction.

The increased heat produced a higher pressure in the core cooling system triggering the release of a pressure relief valve. Once the pressure was released the valve should have shut. It failed to do so as had happened elsewhere before.

A light which triggered when the valve was activated went out once the activating signal stopped. But the valve had not shut. Workers assumed it had and missed other warning indicators showing the heat beyond the valve was still elevated.

The continued release of the central coolant water caused problems in the containment system which allowed for leaks to occur and local radiation contamination.

Less coolant and reduced pressure allowed for steam pockets to build and conditions for increased core temperatures to occur.

The steam caused reactions with the rod coatings causing more problems in control.

Eventually it was determined that about half the uranium fuel had melted.

Contaminated steam affected the concrete of the containment vessel.

Effects Outside The Power Plant

There was some release of gases into the air from the accident, the majority in the form of noble gases which were not considered so much of a problem. A very small amount of radioactive iodine was released. This was later felt to be unlikely to have caused a measurable health change.

Three Mile Island created nervousness in design for nuclear reactors. And it slowed further deployment of them for some years.