Tri Alpha Energy is relatively unique in its approach to nuclear fusion energy design. Apart from filed patents little information has been forthcoming on its progress until recently.

And yet there has been a steady stream of private investor funds including high profile ones. Paul Allen, previously of Microsoft, is one of them. 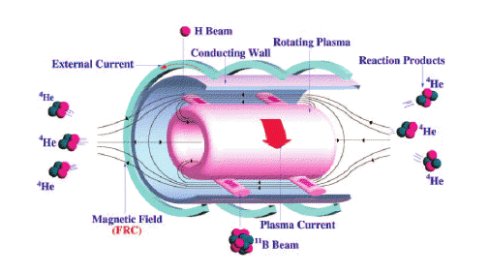 As with all aneutronic ones the design ideas are appealing. Utilising boron-11 and protons from hydrogen nuclei to cause fusion to carbon-12, thence breaking up to three helium-4 nuclei - the three (tri) alpha particles! - produces little to no neutrons and therefore little to no significant radioactive products.

The design is relatively compact and safe to locate in or near population areas making reticulation and associated power losses relatively minimal.

Like all fusion reactor ideas, the appeal is also in the safety of the process. If something interrupts fusion it simply stops. There is no ongoing decay process that causes meltdowns and other similar problems with nuclear fission reactors.

Also the power production, as with a few other similar projects, is highly efficient. There is no secondary conversion of heat to create steam required to drive turbines or other equipment.

The positively charged ion beams can be directed through something like an inverse cyclotron converter - a coil-like apparatus that converts the moving charged field directly into electricity. 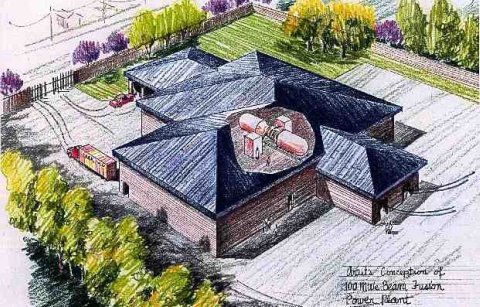 Most images Courtesy of the University of Florida site

Power generation efficiency is therefore expected to be over 80% of what is produced in the reaction.

The conversion of the boron-11 and proton fusion to the three helium-4 nuclei creates nearly 9 million eV of energy.

Tri Alpha Energy was founded in 1998 with its corporate headquarters located in Rancho Santa Margarita, California, close to the University of California, Irvine, where some of its developers have worked.

Private funding of the project does not seem to have been impossible to come by. From 2000 to 2005 nearly $12 million was raised, mainly from two billionaires.

News of further investments of $40 million in June 2007 and a further $50 million in August 2010 has been published in international sources.

Part of the first $40 million was noted to have involved Paul Allen founder, with Bill Gates, of Microsoft. He withdrew from active work in Microsoft to have his Hodgkin's lymphoma treated and never resumed active work with the company, officially resigning in 2000. His recent non-Hodgkin's lymphoma diagnosis has led to the release of his autobiography.

His interest in physics from his early years no doubt influenced his commitment to projects like Tri Alpha Energy's, just as his desire to be an astronaut has caused him to pursue space flight.

As an astute investor, he obviously feels the Tri Alpha Energy project has significant merits. 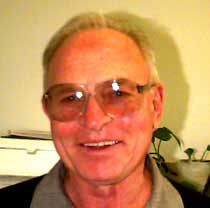 The main name associated with the design for this system is that of Norman Rostoker, the 86 year old founder of the company. His name occurs with all the patents related to the genesis of the design.

Norman Rostoker, the Ontario, Canada-born physics professor has been involved in a number of prominent scientific foundations.

Born on 16 August 1925 he achieved his first degree in 1946 in physics engineering. His masters was in mathematics through Toronto University. He moved to the USA to what was then known as the Carnegie Institute of Technology, now Carnegie Mellon University, in Pittsburgh, as an experimental physicist obtaining his doctorate in 1950.

In 1953 he transferred to Chicago to become supervisor of theoretical physics at the Armour Research Foundation at the Illinois Institute of Technology.

From 1956 he was stationed in San Diego as a research staff member at General Atomic, moving on in 1962 to the University of California, San Diego as professor of physics, then back to General Atomic from 1965 as manager of Fusion and Plasma Physics projects there.

In 1967 he moved to Cornell University as IBM Professor of Engineering and Chairman in the Applied Physics Department.

It was back to California in 1972 as professor of physics, chairman of the physics department from 1975 to 1978, and becoming an emeritus and physics research professor for the University of California, Irvine in 1993. 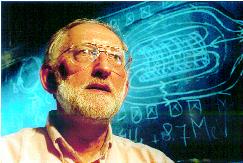 Another major developer of the process is Hendrik J Monkhorst, Emeritus Professor at the University of Florida.

A PhD graduate of Groningen University in the Netherlands, he has been involved for many years in the process along with input from the National High Magnetic Field Laboratory in Florida for work in designing the magnetic confinement fields.

Michl Binderbauer, Chief Technology Officer and Vice President for Tri Alpha Energy, also has his name linked to a number of the patents. He has been based, like Norman Rostoker, at the University of California, Irvine.

There are a number of diagrams that can be found on associated papers and other publications from the past, along with descriptions within the filed patents.

Essentially the Colliding Beam Fusion Reactor is based on a field reversed configuration.

Boron-11 and protons are injected into the horizontal cylinders surrounded by solenoidal magnets. These magnets and the magnetic fields established by the plasmas themselves cause the plasmas to rotate inside the cylinders in the field reversed configuration. 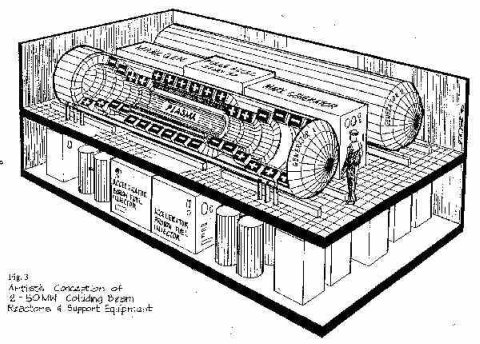 Within this the heavier boron-11 nucleii travel more slowly than the single proton hydrogen nuclei. These faster-moving protons collide from the rear with the boron-11 nuclei causing optimally a fusion reaction - producing carbon-12 and decaying to the three helium-4 alpha particles.

The electrons from the plasma are aimed to be held in a magnetic "well" within the structure to maintain stability.

The generated alpha particle ions will be ejected and passed through the coils of the inverse cyclotron converter, producing electricity.

More hydrogen and boron fuel can be injected to maintain the reaction.

Without significant neutron production the apparatus should be readily maintained. Its relatively simple design should make production of the power units relatively cheap.

Interestingly a recent presentation in August, 2011 from which a powerpoint presentation was posted, suggests current research is pursuing deuterium fusion. This can be a step along the process to aneutronic fusion, but was not spelled out.

Just out in at the end of October 2012 is a 79 page PDF file report on progress and plans, including ideas on proton-boron aneutronic fusion as part of their direction.

Although registered from 2002 the domain for the company had not elicited any visible information.  Just recently it has published its website.

It has also released a publicly accessible video on its work, including comments from it founder Norman Rostoker, a number of scientists and board members involved in the work.

Tri Alpha Energy has a number of very appealing design features. It has eager private investors willing to sink significant money into the project. Just how far along development has progressed is difficult to elucidate with so little public information.

But radioactive-free nuclear fusion energy production would be welcomed in a country like nuclear-free New Zealand and by a world sobered by Fukushima's recent events. The advanced age of its main investigators raises some questions about ongoing development.