AFRD Heavy Ion Fusion was studied for decades before interest seemed to wane. Suddenly there is a new development surge, not only from a private US initiative I have covered, but also from the major institutional players.

There is obviously a feeling this is a viable road to nuclear fusion alternative energy with its clean, near unlimited future supply appeal.

Interestingly the US has a heavy commitment to magnetic confinement fusion mainly through the large international cooperative venture ITER in France.

It also has been involved in the other main fusion approach of inertial confinement with a number of ventures, the main one being the NIF project conducted by Lawrence Livermore National Laboratory. As I mentioned when covering this initiative much of the impetus for it seems to be driven by the laboratory's mandate to manage the nation's nuclear weapon stockpile.

The NIF's huge 192 laser array focused on a hohlraum hollow tube containing a solid deuterium and tritium pellet is currently limited to a few firings a day. Optical focusing lenses tend get damaged with repeated shots.

Solid state diode lasers would allow a more rapid firing sequence. But they are also costly at present.

Analysing the method, those related to the AFRD project note that laser efficiency is around 10% of input power, whereas accelerators tend to be nearer 30% efficient. 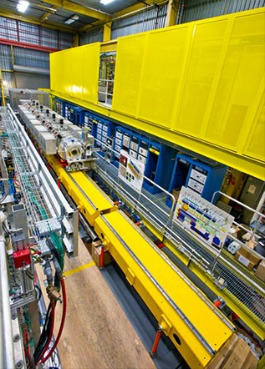 Accelerators, with magnetic field focusing and the ability to fire rapid repeated pulses, have many advantages. In fact the general consensus seems to be that it will be heavy ion accelerator beams, rather than lasers, that will actually end up driving a viable inertial fusion device.

The challenge is to develop a cost-effective accelerator that will make this affordable.

Related to such a desire are recent developments in proton accelerators. Medically useful in treating cancers with advantages over X-Rays with less complications and more accurate focusing, current units are basketball court sized and cost $150 million each. Few medical facilities can afford them although they could be widely utilized.

LLNL has been working on a proton accelerator for this purpose. Instead of needing a cyclotron, a linear accelerator between two to four metres in length can produce equivalent beams. It is expected a prototype of the style that can be marketed to hospitals will be finished in 2013.

Developments from this venture have been able to be applied to the AFRD heavy ion fusion project.

AFRD - standing for Accelerator and Fusion Research Division - is a section of the US Department of Energy Office of Science at Lawrence Berkeley National Laboratory (LBNL), in Berkeley, California.

The project has become a joint development between three arms of the DOE.

Other research has contributed to the understanding for the project. Prior theoretical and experimental work on ion beams had been undertaken by the University of Maryland and the Naval Research Laboratory.

With the past experience of the heavy ion field, research is being undertaken in a step-wise fashion. From early analysis in 2002 it was estimated that effective power generation by this method would still be ten to twenty years off (20 to 30 years from the time of the estimate).

Heavy ions that will be used are expected to be those of xenon, mercury and cesium nuclei.

Working towards this the AFRD project, through the VNL, is building accelerators of light lithium ions. Once the techology is proven it can be upgraded to heavy ions.

Following the theoretical research background of the involved labs, the initial tests will allow for experimentation in areas of physics not well understood. In particular exploration of warm dense matter - the state between solids and plasmas will aid the understanding of how fusion targets will respond to high energy ion beams.

In magnetic confinement fusion the tortuous plasma convolutions produce bubbles within them causing unwanted cooling. Some of this is only now beginning to be explored and understood.

If similar limitations and unexpected changes can be revealed at an early stage in inertial fusion, hopefully adjustments can be made earlier in the design process.

In AFRD experiments arising from the Berkeley Lawrence Lab the NDCX-I design accelerator was a huge encouragement.

As ions are accelerated in a beam their combined positive charges tend to push the individual ions apart. The beam becomes wider and less concentrated.

To initiate inertial fusion the beam needs to be focused to the smallest possible point. NDCX-I, standing for Neutralized Drift Compression Experiment, managed to achieve a fifty times compression of the beam, far higher than was expected. 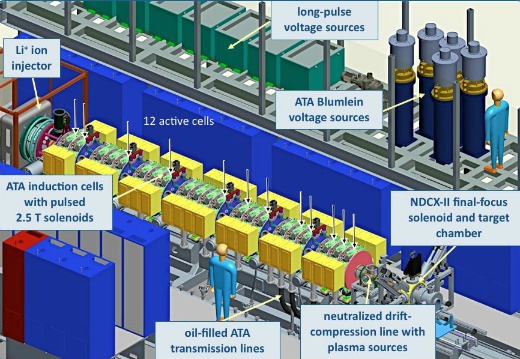 The next generation NCDX-II was funded in 2009 with an $11 million grant from the American Recovery and Reinvestment Act.

It was designed as a unit ten meters long to produce a beam of around 200 billion lithium ions in each pulse.

At initiation each pulse is produced over 500 nanoseconds, but delivered over one nanosecond to the 1mm target spot.  To do this the tail of the pulse moves faster than the head, catching up with it in its travel.

2MeV (two million electron volts) arrives at the foil target in that nanosecond (It is expected to be extended in the future to produce 3MeV).

Instead of passing though the foil, which at four one hundredths of an inch is a tenth the thickness of regular aluminium foil and made from gold, tungsten, carbon or a metallic foam, it liquifies it into a droplet of warm dense matter.

The science of warm dense matter has not been well researched. At thousands of degrees Kelvin rather than that of millions of degrees in plasmas, it has unique properties. It occurs in many areas of the universe including at the core of Jupiter and other large planets.

At the AFRD, the Accelerator and Fusion Research Division of Berkeley Lawrence Lab, the NCDX-II assembly was completed in April 2012. It will be commissioned in stages.

Ions are injected into the system from a disc of lithium alumino-silicate heated to 1,275 degrees Centigrade by surrounding tungsten coils.

The body of the accelerator at AFRD came from Lawrence Livermore National Laboratory. The accelerator cells have been modified from its Advanced Test Accelerator. Each unit cell can be rearranged as required.

To customize the accelerating ion beam, cells beyond that are powered by proprietary Blumleins. These units were used for the medical linear proton accelerators. They deliver 250,000V individually for each cell in a controlled fashion.

The Blumleins are named after their inventor, the British Alan Blumlein, born in 1903, who in his short life registered 128 patents. Beginning with improvements in the telephone, he developed stereo sound to improve film experiences, recording improvements over Edison's initial ideas which gave EMI its leading edge, elements of television, and finally in radar.

It was while testing airborne radar to improve bombing accuracy of British aircraft that he was killed in June 1942 when the Halifax bomber he was in caught fire - due to a nut that had been incorrectly tightened in the plane's fuel system. News of his death was kept secret until the end of the war to prevent Hitler from becoming unduly encouraged. 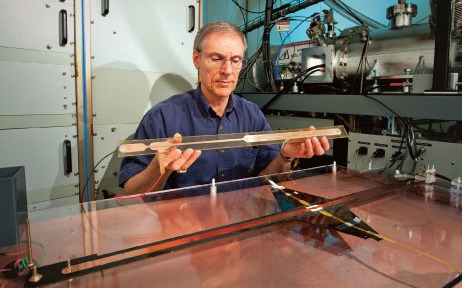 The Blumleins allow for high voltages to be delivered with exquisite precision in a serial or other programmed array. In the medical proton accelerator one thousand units have been aligned serially along a two meter length.

Multiple thin alternating layers of conducting and insulating materials were developed for this by an engineer at Sandia.

Once accelerated the ARFD lithium ion beam enters the drift part of the unit. Technology for this part comes from Princeton Plasma Physics Laboratory.

Erik Gilson designed the plasma source which provides negatively charged electrons to compress and neutralize the positive charge of the ion beam. Most particle accelerators use a vacuum to maintain the beam.

In a poorly understood mechanism, when a high voltage is applied its surface produces swarms of electrons and ions. It is thought it could possibly arise from gas absorbed into the surface of the ceramic.

The Lawrence Berkeley Lab AFRD contribution, apart from the test site, is in the diagnostics required to monitor the accelerator beam.

Diagnostic monitoring equipment analyzes the beam between each of the twenty seven individual relocatable elements. As changes are observed adjustments can be made in sequential runs to produce an ideal beam.

Once the AFRD NCDX-II produces an appropriate beam and all the necessary data is produced for warm dense matter, upgrades can be developed.

Eventually it should be possible to run multiple heavy ion accelerator beams to produce effective inertial confinement compression which could lead to a reproduceable nuclear fusion energy supply.

With the current linear accelerator being only ten meters in length, it would be a significant advance in material and power unit size over that currently proposed by Fusion Power Corporation. The lead time, though, is looking to be significantly longer.