Heavy ion fusion 2011 technology seems to have burst suddenly on the scene in 2011 through the Fusion Power Corporation and its StarPower System©. Their promise: huge electricity generating nuclear fusion power stations within ten years.

Not only that, they also promise production of designer hydrocarbon fuels from renewable sources, desalination and heat energy available for intensive large industrial applications.

Diagrams on this page courtesy of Fusion Power Corporation 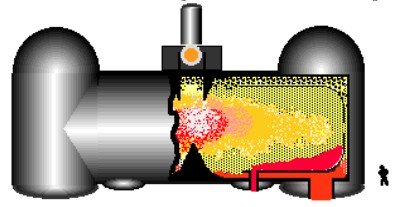 Applying techniques available for many years they challenge large-scale, huge multinational investment developments like ITER that publicly state they will not produce effective energy generation for decades.

What is this company? Who is behind it? What is their technology?

Although incorporated only recently, about 2008, the board members behind it are relatively more mature people each with years of experience in their field. The members' skills cover the range (finance, digital engineering, geophysics and resouces, public service) needed to ensure a company succeeds.

It is formed around the experience of their chief technology officer, Robert J Burke, and patent-pending IP from Arcata Systems. The IP is now owned by Fusion Power Foundation with Fusion Power Corporation as their exclusive licensee. 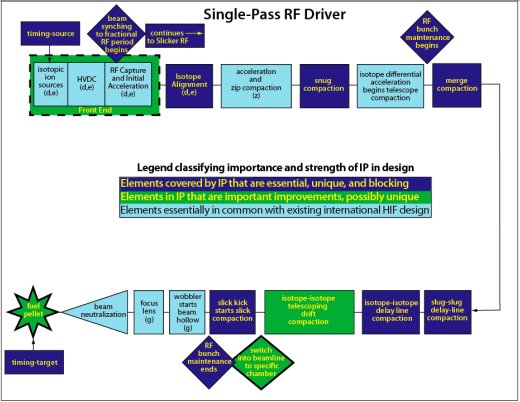 Arcata Systems in the US also continued to develop heavy ion accelerators. As a consequence the IP lies in the private sector. The huge public military sector had relatively ignored it.

In the late 1970s there had been a consensus around heavy ion accelerators experience with agreement it showed significant promise. But as the then recently-risen oil shock prices fell again, a lowered financial incentive made it seem less viable and important.

While at Argonne National Laboratories Robert J Burke helped develop the lithium blanket to protect the interiors of fusion chambers from neutron damage. The same lining also served to breed tritium for further fusion fuel in the process.

He was also leader of the team there from 1976 to 1980 in the work on heavy ion nuclear fusion.

Essentially an inertial confinement system for nuclear fusion the StarPower System© uses similar ideas to other inertial fusion developments. There is a central target which they currently talk of as being held in a hohlraum to be bombarded from each end by the heavy ion accelerators. The target will be a sphere with an outer coat to compress the fuel which is held as a layer inside the shell.

The difference is FPC's outer shell is proposed to be made from lithium. The fuel in the pellet, as with these other projects, will be the hydrogen isotopes, deuterium and tritium.

As with the NIF project two energy shots will be fired in rapid succession, the first to heat the outer shell and drive compression of the fuel. The second shot ignites the compressed fuel.

FPC contend that lasers cannot penetrate the metal plume from the initial shot enough to cause satisfactory ingnition. NIF is developing laser point-aimed techniques through a gold cone to counter this along with the HiPER project. For FPC strongly penetrating heavy ions make more sense.

Tokamaks, stellarators and other magnetically confined fusion reactors are planned with a lining of lithium to breed tritium for the deuterium and tritium fuels required.

In one of the variations on the lithium blanket FPC's approach in their heavy ion fusion 2011 type proposal is by raining lithium down, onto and around the lithium seed capsule. By attempting to maximise the lithium concentration about the seed capsule, neutrons created from the fusion reaction will be absorbed close to the generation site and well away from solid walls that would weaken with continued high energy neutron bombardment.

As the lithium rains down it increases in temperature and varies from a vapour to condensing droplets. Fusion Power Corporation proposes that the heated lithium will pass to the heat-collecting ends of the reactor chamber. Here the heat can be used for power generation (through steam driving turbines) and for a number of other purposes. 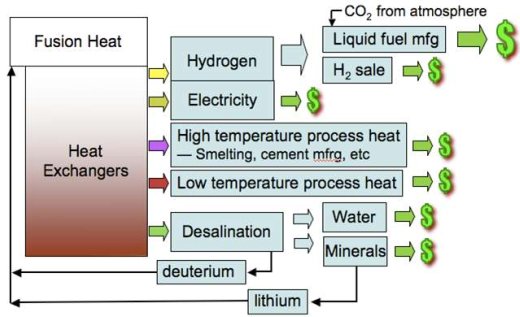 These include synthetic hydrocarbon fuel generation by combining the hydrogen produced in the reactor with carbon dioxide (a type of carbon sequestration). Hydrogen can be generated through the dissociation of water into it component parts. This occurs above 3000K, with complete breakdown into individual atoms of hydrogen and oxygen at 4000K.

Other heat can be used directly by feeding it out from the reactor to huge heat-requiring industrial processes (smelting, cement manufacture). The reactor chamber needs to be able to withstand these high temperatures and the generated pressures. Current nuclear fission reactors require similar high-demand materials.

Heavy ion fusion 2011 proposes using heavy ions, although they have yet to determine which particular ones. But they do give the possibilities of xenon, tin, lead, or mercury. Using mixtures of ions and isotopes lends itself to rapid sequential pulses.

The linear accelerators will be several miles long, driven by radio-frequency. The US collaborative program known as the Virtual National Laboratory for heavy ion fusion has dismissed radio-frequency saying it is inadequate in power to drive the heavy ions. They prefer induction methods. But the design and length of the FPC acclerators lend themselves to the results required.

Where are they going to build these accelerators? They propose having them situated underground. Using established civil structures like roads to run them under would lessen planning complications that tracking under a lot of private land would cause.

Heavy ion fusion 2011 employs the power that accelerated large nuclei inherently have along with the much larger collision target area heavier atomic nuclei offer. To allow more ready interaction of the nuclei, FPC's idea is to have lightly charged atoms, preferably missing only one electron per nucleus each.

This is in contrast to the physical conditions the high temperature fusion power reactors are aimed at. At the millions to billions of degrees generated in them electrons and nuclei are fully dissociated in the plasma form. This produces a more powerfully charged nucleus with less chance of collision interaction due to the high number of positively charged protons present in each nucleus.

With multi-mile long linear accelerators powering it the heavy ion fusion 2011 of Fusion Power Corporation is no small structure. This underlies the thrust of the proposal. We are talking of huge reactors expected to cost around $30 billion a piece. Also FPC proposes a number of the reactor chambers in one place to leverage off economies of scale.

The first real test of the heavy ion fusion 2011 technology will be in an active power station.

These huge constructions fit with ideas of energy supply companies with huge power stations, rather than smaller, more local community ones.

FPC feels other similar developments, like the Mahattan Project, landing on the moon, the internet, etc arose rapidly due to the demand for them. Hence their projected date of launch in spite of the absence of any current working model. A Japanese company has more recently been seriously considering the FPC proposal.

Heavy ion fusion 2011 is certainly not for the faint-hearted at these costs. Nor is it something that will lend itself to powering poorer countries.

Yes the reactors will deliver huge amounts of power - Giga Watts. Yes the technology has been proven in elements at different places. But is building such a huge, expensive, centralized structure justified? Especially when there are other options or possibilities out there that could come on-line even sooner.