Polywell fusion, a type of electrostatic confinement fusion, had years of US Navy development finance behind it. Even now, although its founder has died, there is ongoing research underway with later versions of it.

Due to its design, it had the possibility of generating significant alternative energy and being used as a propulsion unit - one of the reasons for the Navy's interest. With its goal of using aneutronic fuels it also held out the promise of being very safe.

Images on this page courtesy of Energy/Matter Conversion Corporation. 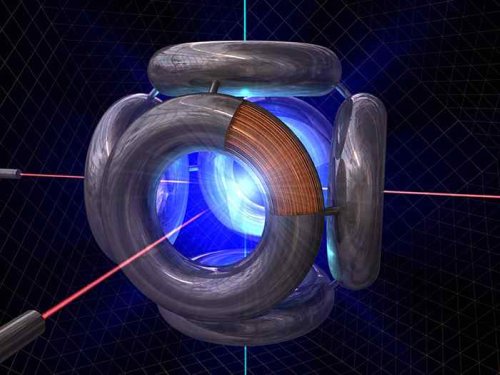 The idea follows from an apparatus that is still widely used for neutron production. The inventor of television, Philo T Farnsworth, developing ideas for vaccuum tubes found electrons being suspended in the tube between two electrodes.

In collaboration with Robert L Hirsch he developed the Farnsworth-Hirsch fusor. This was a sieve-like spherical grid that when charged could hold electrons or ions depending on the charge of the grid.

An improvement on this was the Elmore-Tuck-Watson fusor with a negatively-charged internal grid surrounded by a positively charged external grid or wall. All this was confined in a vaccuum.

Electrons shot into the system tended to accumulate at the centre of the sphere, repelled by the negatively charged grid. If positively charged ions were shot into this system they would be drawn into the highly negatively-charged electron well. As their momentum caused them to pass through the electron cloud, they would slow down and be drawn back, oscillating about the centre. Every thousand or so passes two ions would be likely to collide and some of these could produce a nuclear fusion reaction.

The grid structure itself created problems with the repeated passes back and forth of the ions. Any collision with the grid would cause a loss of energy for the colliding ion, reducing its effectiveness. Also the transferred energy would cause the grid to heat up and ultimately melt. Due to these limitations an end point where more energy could be generated than it took to drive it could not be reached with this design. However fusion would occur and produce neutrons. The design is still used today for neutron production. A number people have created their own fusors, including a now famous youngster Taylor Wilson who even had the chance to present his project at the White House.

In the early 1970s Robert W Bussard (b Aug 11, 1928) worked as assistant director immediately under Robert L Hirsh in the nuclear fusion arm of the now defunct Atomic Energy Commission. He was aware of the fusor design and its limitations and recommended the US pursue a fusion program with the Russian-led tokamak design.

Around 1960 he had become famous for his idea of the Bussard ramjet rocket propulsion system which found its way into a number of science fiction stories. A variation using matter and anti-matter formed the basis for the drive of the Star Trek starships. Bussard worked with US government laboratories at Los Alamos, Oak Ridge TN, and with TRW Systems (involved in developing intercontinental ballistic missile systems among other things).

In view of the slow progress with results from the tokamak he began revisiting ideas of the fusor design. Knowing the problems there were with heating of the grid, in January 1983 he arrived at an idea for a more open but still essentially spherical structure to confine a well of electrons.

For a very lucid explanation of fusion, its benefits, and the process of developing the Polywell Fusion apparatus the Google Tech Talk he did on Nov 9 2006, less than a year before his death on Oct 6, 2007, is invaluable.

Bussard's idea was for a polyhedron of rings which have generally been of six sides forming more of a cube. He ideally wanted a twelve-sided polyhedron for his WB8 machine, although the older configuration was ultimately chosen.

The rings in the Polywell fusion apparatus held wound coils of wire. Passing a current through these an electromagnetic field was created - effectively the negatively charged edge of the system to confine the electrons in a well in the middle. The surrounding vacuum chamber, or another wall within it, could create the positively charged outer shell. There was more effective room for free movement of the ions and electrons without incident ions causing heating of the frame.

The Polywell fusion machine was an effective electrostatic confinement device, rather than magnetic confinement, although electromagnets were used to create it. 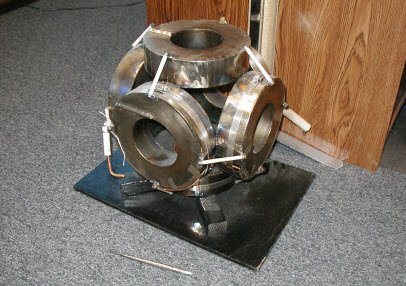 For fusion the Lawson criteria of temperature, the density of fuel and confinement time all combine to produce the ideal fusion conditions. Temperature is usually represented in electron Volts (eV). This energy can be created by transmitting or transferring the electron or ion through that potential difference, which is what occurs with the Polywell fusion design.

As with the fusor idea, a central well of electrons was created. Then ions could be injected from an ion gun into the device causing the oscillation of the ions to provoke eventual fusion on one of their multiple passes.

Initial machines were small with square-shaped coil containers. Later ones tended to use more cylindrical coils.

It soon became evident there were problems associated with maintaining effective electron confinement within the central well. It took a number of generations of the Polywell fusion device to realise the design flaw.

Eventually it was realised that the touching coil points created crossing electromagnetic field edges that allowed the electrons to leak.

By spacing these adjacent edges, better confinent was achieved. There was still some tendency for electrons to wander outside the system. But they could now also readily return.

By the time of the WB6 Polywell fusion apparatus, with the new coil gap design, and built in the last year of the cycles of Naval funding, more significant results were achieved.

A number of sequences were run to produce results before the funding ran out. The tests terminated with a short occurring across one of the ring coils. 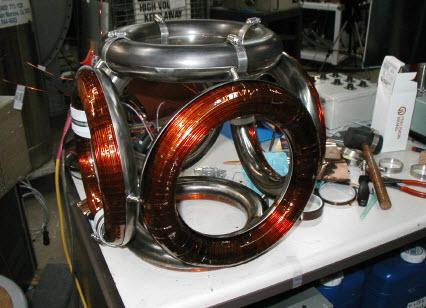 Data assessed after the tests showed the Polywell fusion WB6 using deuterium fuel had been generating fusion producing a billion neutrons per second. This was achieved with a drive differential of 12.5kV providing a central potential well at 10kV giving the deuterons 10keV kinetic energy on arrival at the centre of the device.

As the coils were not cooled the test pulses had to be conducted over less than a millisecond. Even so the result was spectacular when compared to the equivalent results for a fusor. To achieve the same output, using the much more readily fused combination of deuterium and  tritium, a fusor would need to apply 150kV.

The cessation of the eleven year continuous Naval funding allowed the results of the Polywell fusion project to be released.

Robert Bussard was able to give his Google Tech talk and reveal his ideas for what he felt should happen next. Over the eleven years of research $18 million had been invested.

Knowing the mathematical scaling of results for the various sizes of the Polywell fusion device, he was keen to press for an apparatus which would achieve a viable workable nuclear fusion power generator. Keen to use fuel for aneutronic fusion with hydrogen and boron he knew he would need to achieve 200kV.

Calculating the rising cost with increased size to about a three metre vessel it would require around $200 million to build. But it should generate 100MW of power.

One of the beauties of a Polywell fusion generator is the relative simplicity of harnessing electric power from it. Just as with the Lawrenceville Dense Fusion device, electron and ion beams can directly induce power in a coil arrangement reversing the particle accelerator process. No costly turbines need be involved. Power generation would be much cheaper than any currently available process.

Unfortunately this has not so far been followed up.

Yet since Robert W Bussard's death further research has been undertaken by the Navy, moving the work from Santa Fe, New Mexico to San Diego. Hiring researchers to order to achieve certain goals they have explored the WB7 and the WB8 Polywell fusion devices. Progress can be followed by the quarterly reports on public expenditure on the US government funding transparency website.

The Navy's involvement is driven more by the desire for an effective propulsion system. People involved in the Energy/Matter Conversion Corporation have banded together seeking money through donations to build a working power generation unit as noted on EMC2's website..

Interest in Polywell fusion has travelled world-wide. Lectures on it at Sydney University inspired a student there to embark on making his own device. He has recorded his progress with extensive photographic records on his blog on the project.

Another interested researcher in Brooklyn, inspired by the Sydney work, has built an initial fusor design and recorded his progress on a video. He placed it on Kickstarter to fund the next stage he wishes to pursue

It appears interest in Bussard's Polywell fusion device is unlikely to wane. The relative simplicity of the design and its promise of cheap, continuous clean energy is too compelling.