The spheromak confinement idea has gone through a couple of periods of intensive research and then quiescence. In the process it has produced much useful data and developments that have contributed to other nuclear fusion initiatives. Some results have mystified researchers but are mirrored in other fusion approaches.

In its self-contained method of confinement it would lend itself to comparatively cheap reactors if the technology could be further advanced to the levels required for nuclear fusion to occur. 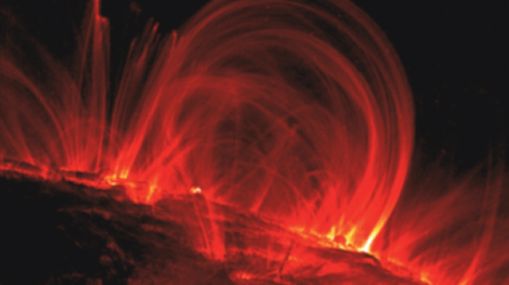 Images on this page courtesy of LLNL.

Experimental use of the design has been encouraged as the produced plasmas do mimic naturally occurring plasma states. Solar flares, solar winds and galactic magnetic fields all share properties found in these units.

Large ballooning plasmas are associated with internal current-producing swirling magnetic fields that confine and interact with each other as they change and reconnect.

As with other approaches like this, following patterns that occur naturally encourages the hope for a confinement that could produce fusion.

From 1959 to 1964 he and a number of other investigators explored creating plasma balls from injector devices that prefigured later developments. These also allowed the group to observe a number of unexpected plasma phenomena.

Illustrations In Other Fusion Design Projects

Hints of a spheromak design occurred in the late 1950s to 1960s ZETA design and with a theta-pinch project by Winston H Bostick and Daniel R Wells. ZETA, which is explored a bit further in Z-pinch information, produced a stable plasma after the initial firing.

John Bryan Taylor a British physicist from the project investigated these stable episodes and in 1974 described the Taylor state of plasma equilibrium. This explains the reversed field configuration being utilised by Tri Alpha Energy and some of the properties of spheromaks. 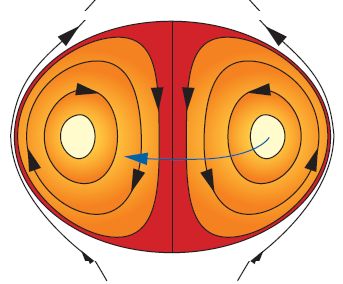 In the USA Bostick and Wells had observed the formation of some stable plasma rings in their experiments.

A number of ventures started from these observations especially at institutions in the US and Japan.

A large spheromak project, the Compact Torus Experiment (CTX) was begun at Los Alamos National Laboratory in the 1980s. Some encouraging data was produced with plasma temperatures reaching 100eV and good confinement.

When US funding for fusion projects was dramatically cut, much work ceased as funding ran out. The CTX, with further Defence Department funds, managed to continue work until 1990.

Confinement times of 3 milliseconds and temperatures of 400eV were achieved. Staff also experimented with injecting further energy into generated plasmas to compensate for heat losses at the plasma edges.

The JET project in the UK had overshadowed the spheromak concept by achieving confinement times of up to 30 seconds.

Some further smaller work continued in the 1990s more relating the astrophysical applications and energy injecting techniques for the more favoured tokamaks. 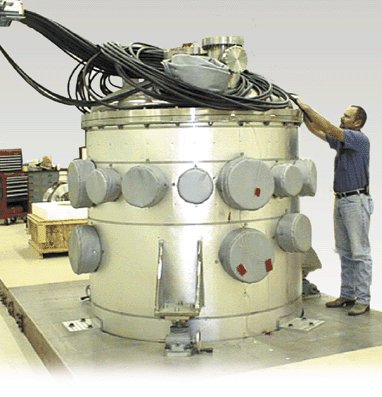 Their observations revealed that for a spheromak as the temperature increased, internal resistance fell, increasing the internal current along with the associated magnetic fields. Increased temperatures were producing better and longer confinement, the reverse of experience with tokamaks.

This encouraged another look at the spheromak design.

In the late 1990s Lawrence Livermore National Laboratories with US Department of Energy funding built the Sustained Spheromak Physics Experiment (SSPX). The design was different from the old spherical idea, following the injection technique processes that had been developed. 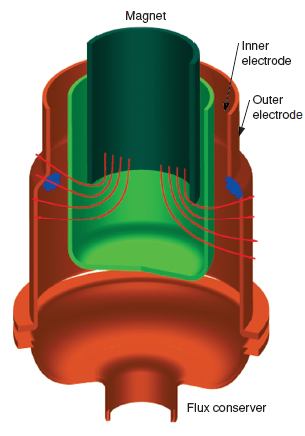 A couple of cylinders act as the electrodes, the central one a little shorter than the outer one. At the centre of these tubes is an electromagnet that creates an initial field.

A small amount of plasma is injected at this base. A bank of capacitors fires inducing a current to be produced in the plasma, propelling it forward into its confinement chamber. In this area the currents and electrical fields fold in on themselves creating a doughnut-like torus.

Minor instabilities of the generated plasma can be corrected by the copper walls. As the plasma with its associated magnetic fields approaches the copper wall it induces a current in the copper, repelling the plasma.

The first firings in 1999 did not produce any plasma.

But soon after plasmas were produced lasting up to 5 milliseconds. Quite a number of shots were able to produced in a day. The limiting rate for the experiments was computer analysis of the results. 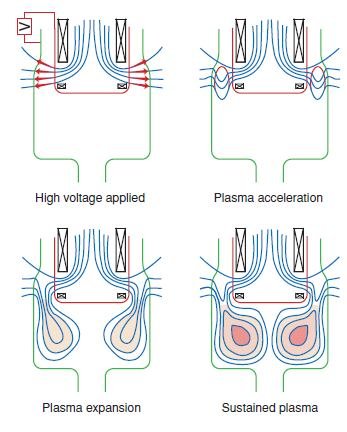 The complex three dimensional plasmas were analysed using modifications of the NIMROD code using parallel computing power from a number of universities and research institutions. The supercomputer at NERSC (National Energy Research Scientific Computing centre) at Lawrence Berkeley National Laboratory was also been employed. This modelling suggested even higher temperatures could be achieved by adjusting magnetic fluctuations.

Observations of the generated plasma changes stretched scientific understanding of their behaviours. Between 3,800 and 3,900 microseconds filaments were observed to form and reorganise themselves. This intrigued observers but does mirror results observed by J W Mather at Berkeley and N V Filipov in Moscow in their independent developments of the dense plasma focus device.

Improvements have been suggested for a number of the spheromak variables. These include employing a slower initial current, higher capacity banks for larger currents, pulsing currents through established plasmas to stabilise them more, and injecting neutral hydrogen to produced increased temperatures.

Not much more work appears to being going on with the SSPX. Benefits of spheromak work are being used in other projects like helicity injection as employed in the NSTX experiment - a spherical tokamak device.